The past few years have gone by like a flash, but even more so for this very mint Ducati special. Built just in 2001 and -02, the retro-tech Mike Hailwood commemorative began Ducati’s Sport Classic phase.  Hard to believe the concept was shown in 1998 and the run of 2000 sold out within hours via the interweb. 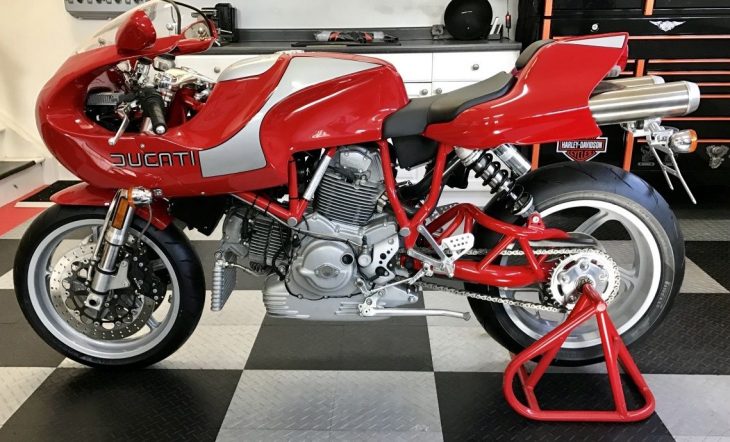 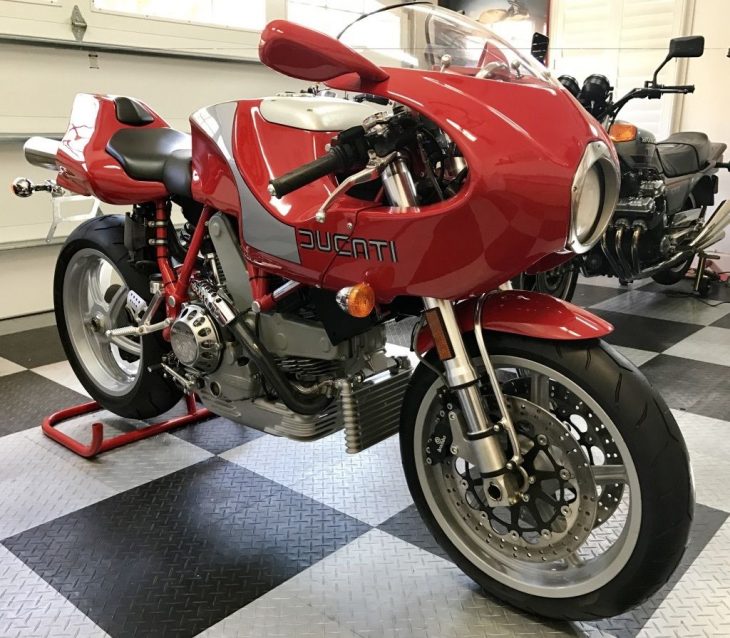 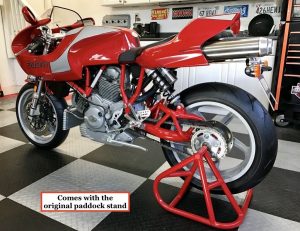 Pierre Terblanche kept the priorities straight when sketching the MH900E, pretty good performance from the air-cooled desmodue, showing it off with the sculpted fairing and belt covers echoed on the tank.  Long and low, the MH900E was more at home on a fast sweeper than a twistie, though it did have fine Marzocchi forks and remote reserve Paoli monoshock.  Red as the fairing, the trellis frame and swingarm show off the manufacturer’s art.  The exhaust makes its way under the seat to a pair of seemingly too long mufflers, extending well past the finned seat fairing. 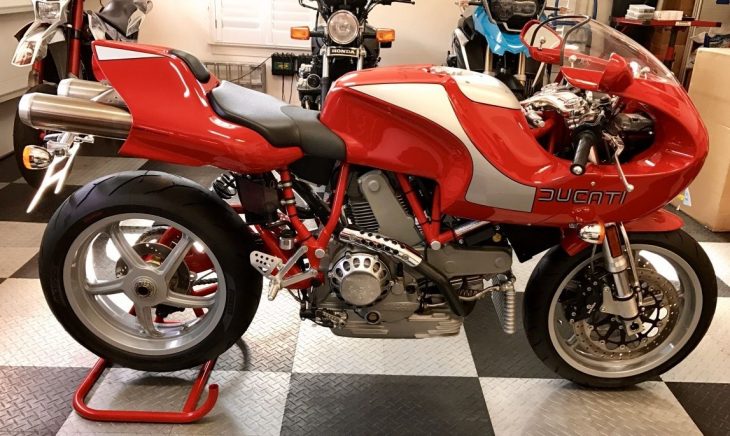 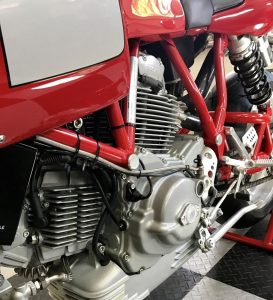 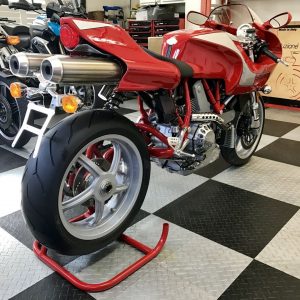 This owner has the bug bad, and has preserved the original numbered shipping crate for the bike.  Though it has new tires and cam belts, the originals are saved just in case.  – Here – is his walk around video, which has a little of the blatty exhaust and dry clutch music.  The engraved open clutch cover is new to me, and the owner says this in the eBay auction:

This particular example #1003 is believed to be the first one released to the public as the first two went into museums and it only has 129 original miles making #1003 the lowest mileage one in the country and perhaps the world in this 1000 series. It was ridden less than a mile a month to keep the fluids-engine-drivetrain-suspension in working order. I just serviced it with new fluids, new Pirelli tires, new cam belt (kept the originals) and both batteries. Please take a minute to look at the hi res pics and how detailed/clean it is, I’ll post the video walk around and start/run as well. To preserve the museum quality it comes with the original date coded tires with the nibs still on them, original cam belt, 2 sets of keys, original books, original decals in place, original clear protector on the swing arm and the one off factory display stand. The rarest and best part of it all is it comes with the original shipping crate and the number #1003 from the factory hand painted on it ! 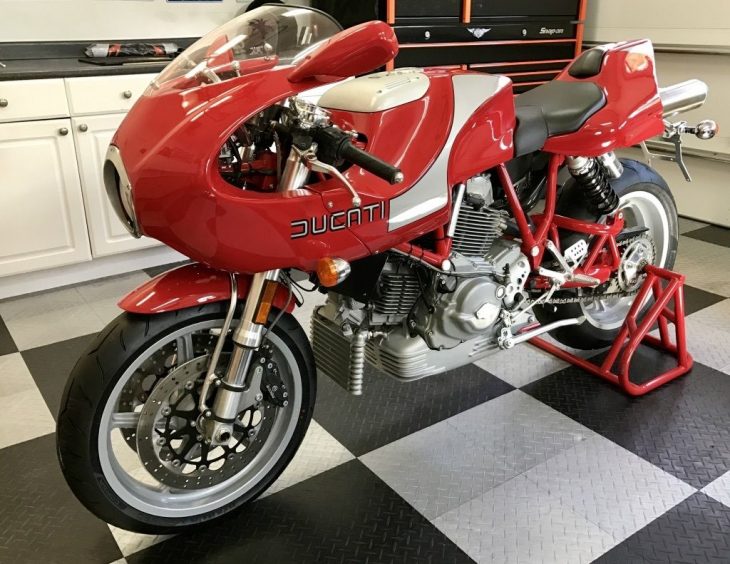 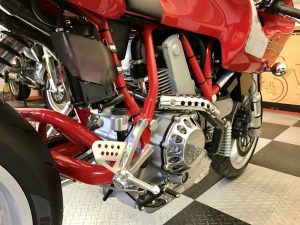 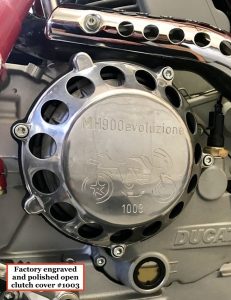 In honor of Mike Hailwood, the MH900E recalls his 1978 Isle of Man victory.  Reviewed as just as much fun to ride as look at, most have languished on the dais, and regularly show up with low mileage, but not low like this.  And I suppose it’s deserved, the MH900E’s design is way over on the show side ( versus go ) and we can’t blame the owner for wanting to keep it nice.  Bidding is quite active and has made back MSRP with almost three days to go.  Likely it will end up on display again, but here’s hoping the new owner doubles the mileage beforehand… 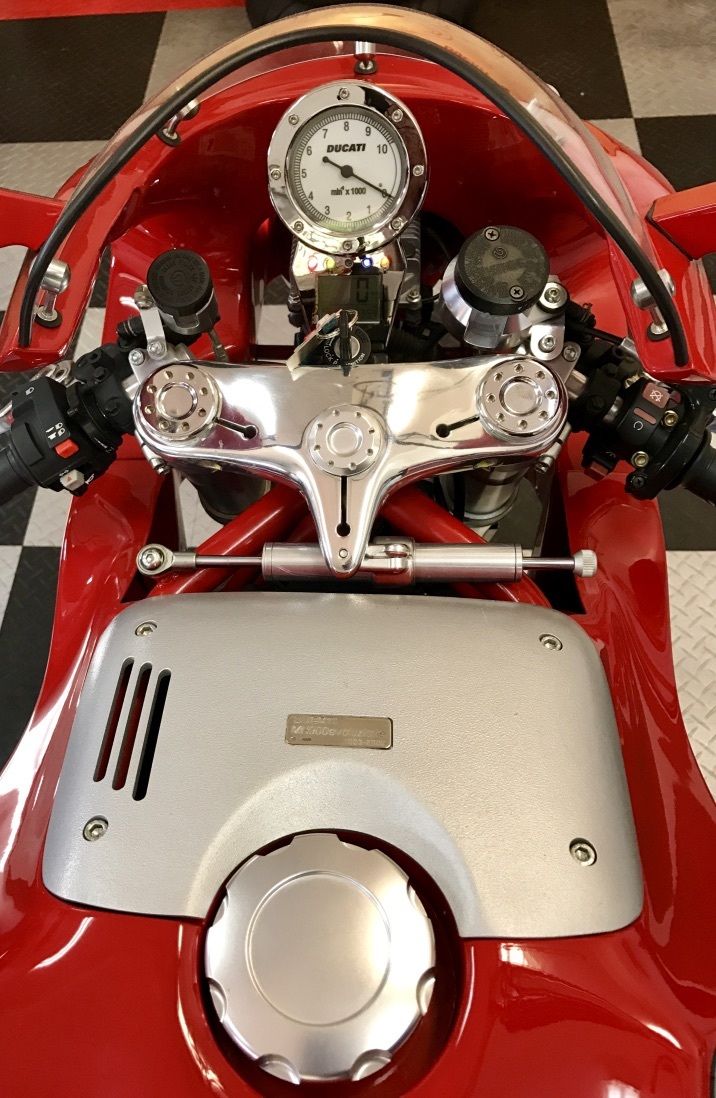