Not winding down during its last year of production, the 999R for 2006 was an update, if somewhat cosmetic, from the the previous years.  And the design that brought Ducati three World SuperBike  Championships would have to serve for the 2007 season while rulesmakers fiddled.  In the livery ridden by Troy Bayliss on the way to a WSBK championship, this example has just break-in miles and a polished Zard exhaust. 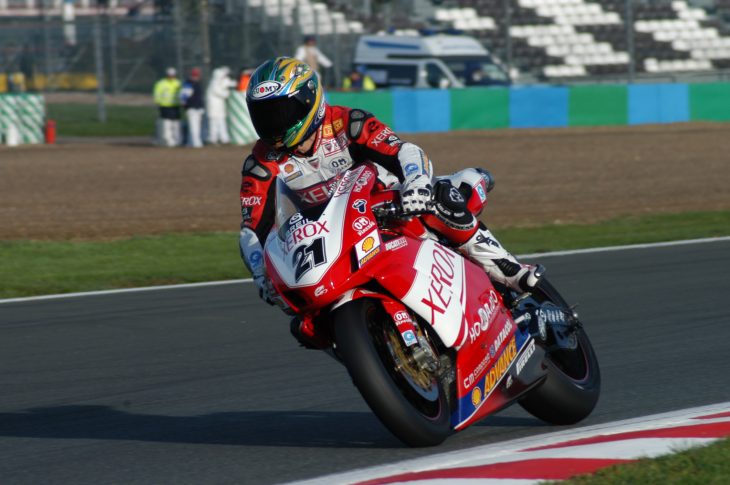 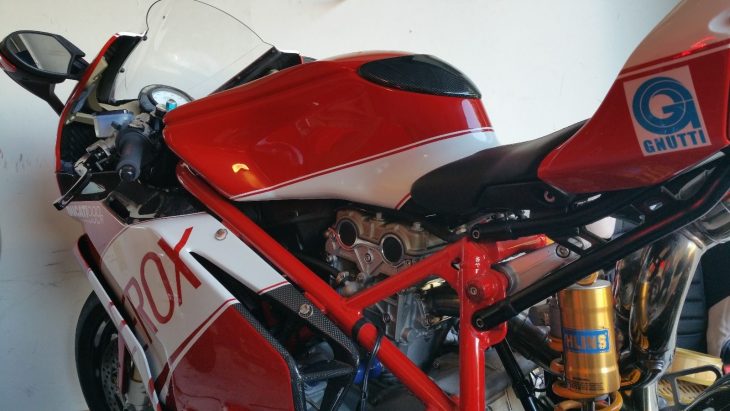 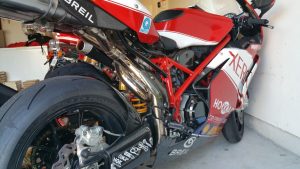 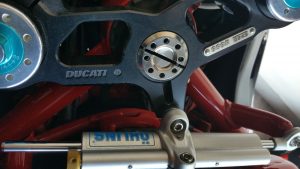 The -R is a radical leg up from the introductory model, with a 26 horsepower gain from new heads and increased compression.  Aluminum valve covers have become magnesium and plastic belt covers are now carbon fiber.  Gear ratios are the same but Öhlins replace the Showa forks and monoshock.  Radially mounted Brembo monoblock brakes are shared, but the wheels are forged instead of cast.  The seat/tank console are adjustable, as are the bars and pegs. 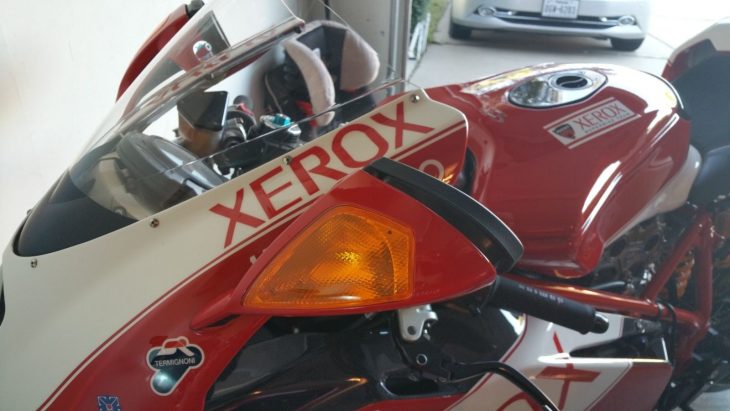 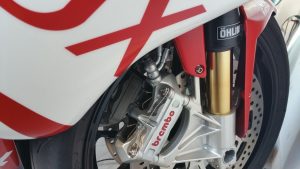 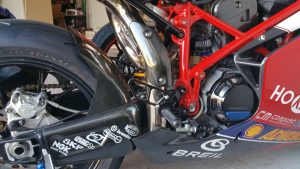 Residing and occasionally riding in central Texas, this 999R appears barely used but ready for duty.  The owner says this in the eBay auction:

The 999R Xerox is a special series motorcycle with a wide range of features that distinguish it from the standard 999R model, such as Öhlins forks with black sleeves, anodized black footpegs and top yoke, Öhlins ‘Racing’ rear suspension with double damping adjuster in compression, aluminum body, counter-spring and spring pre-load setting.  The motorcycle is also fitted with radial-mounted front brake calipers with the red Brembo Racing logo, is decorated with “Xerox Replica” graphics and comes with a racing kit and extra adhesives.

I’m the second owner of this bike and own it for few years and hardly ride on it.  I always keep this bike in the garage and never ride it in the rain. 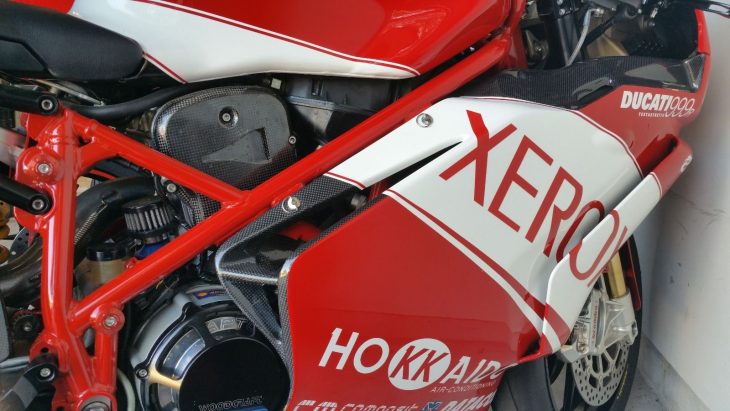 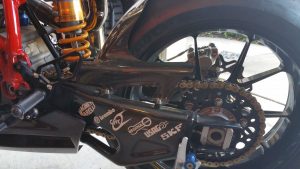 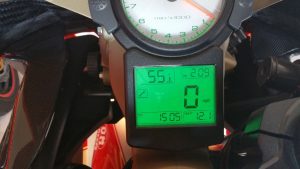 Though Ducati also campaigned the 999 in AMA SuperBike and won some races, the factory ceased their effort after the 2006 season, concentrating on WSBK.  The base 999 got great reviews for riding position thanks to the taller fairing design and adjustable controls, and engine torque, which increased as the testastretta developed.  Few riders will appreciate the improvements that the -R brought to the power and suspension, but they are there, along with the carbon fairings and race-replica livery.  This one appears a fine example of the ultimate variant of the last year of 999 production… 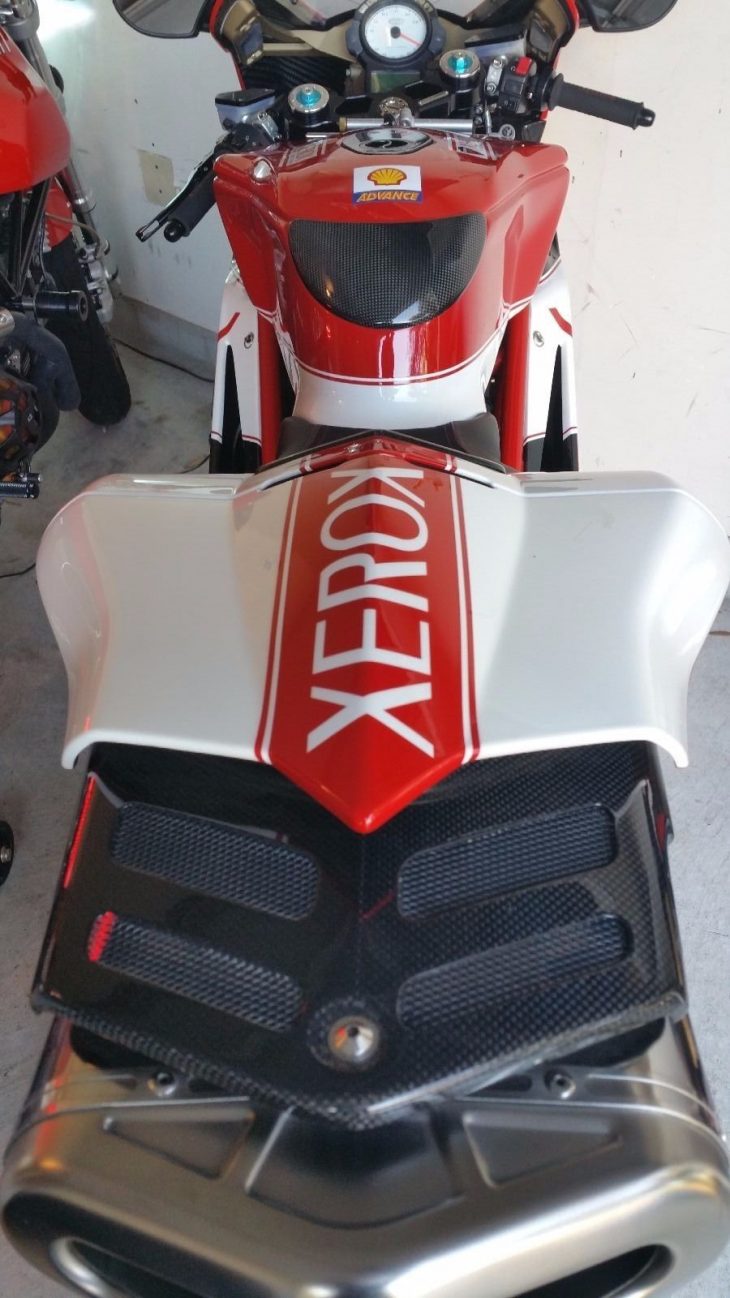