Perennial upstart KTM came to the superbike only in 2008, but has helped the RC8R evolve into one of the lighter weight and enjoyable liters.  RSBFS regular Seattle Used Bikes has a barely broken-in customer bike available. The RC8R is built around KTM-developed Rotax 75-degree Vee, with 175hp derived from four valve per cylinder, two ( different ) plugs per cylinder ignition, and electronic fuel injection.  Chassis tube are big but thin, using the engine as a stressed member, with fully adjustable WP suspension front and rear.  Retro-forces supplied by Brembo, with 4-piston calipers over 320mm discs.  All-stainless exhaust is underneath and for mass centralization barely goes past the swingarm pivot.  The cockpit was made to accommodate various riders, with adjustable seat, bars, levers, and footpegs. Despite having turned under 1,100 miles, this KTM has been serviced with all fluids twice.  Barely used and looks it.  SUB’s comments from their – web site –

This particular KTM RC8R Superbike has seen so little use it is almost a crime ! One owner bike, purchased from Skagit Powersports in 2016, had its first service performed at dealer late 2016, then again late last year all fluids were changed. Since then it has only been ridden another 40 miles.. Life changes and a move out of US dictates this one also needs to be re-homed. Absolutely no damage or scratches, runs properly and is just in to SUB in time for Spring fun! Reviewed as possibly having been assembled by retired Swiss matchmakers, the RC8R got high marks for performance and design, never diluting the sporty formula.  2015 was to be the last year for the FIM Supersport-homologated machine, as the company shifted their focus to more streetable Moto3 400’s.  The new owner of this example will have not only a basically new RC8R, but only of the last out there.  Contact Seattle Used Bikes on (206) 535-6812 or by email – here –. 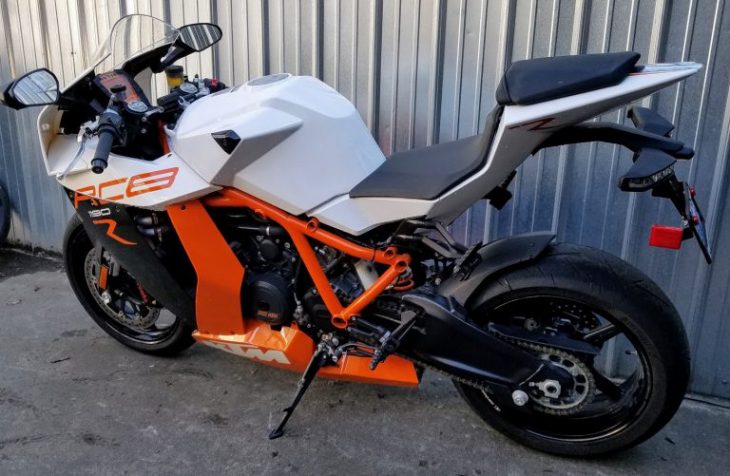