Eddie Lawson rode the factory’s Z1000R to the AMA Superbike Championships in 1981 and 1982. And though he got a better offer from Yamaha in 1983, Kawasaki continued for another year with the replica KZ1000R. With total production under 2000 units, the Eddie Lawson Replica is quite rare and a big, brash time machine of a ride. This example from the northeast looks like an easy return to ride or show status. 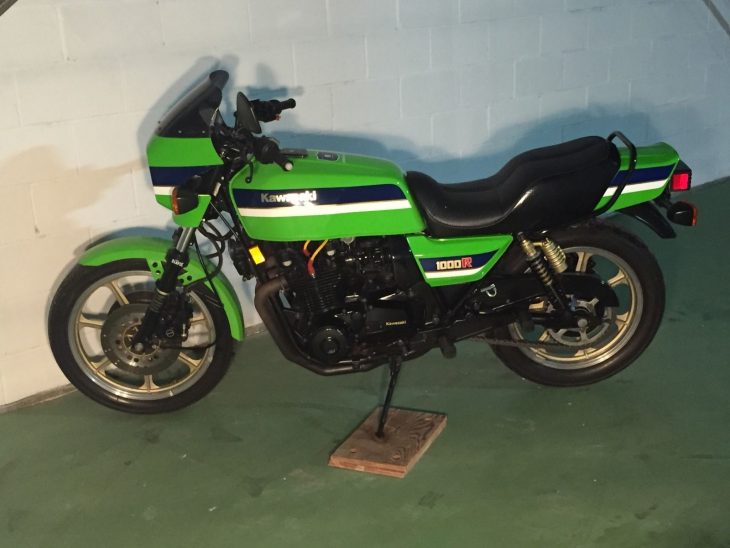 Starting as an idea from over in marketing to improve KZ1000 sales, the -R had slightly quicker steering geometry and a few more ponies courtesy of the dealer-installed Kerker exhaust.  The venerable air-cooled two-valve four made just over 100 hp per liter at 102.  An oil cooler was added to help ensure reliability, as was a wider rear rim and tire.  Damping rates in the Showa remote-reserve shocks and forks were adjusted just for the -R.  A two level seat helped the rider stay in position and Eddie Lawson contributed his own superbike bend for the handlebars.  Replica colors are as attractive now as they were then. 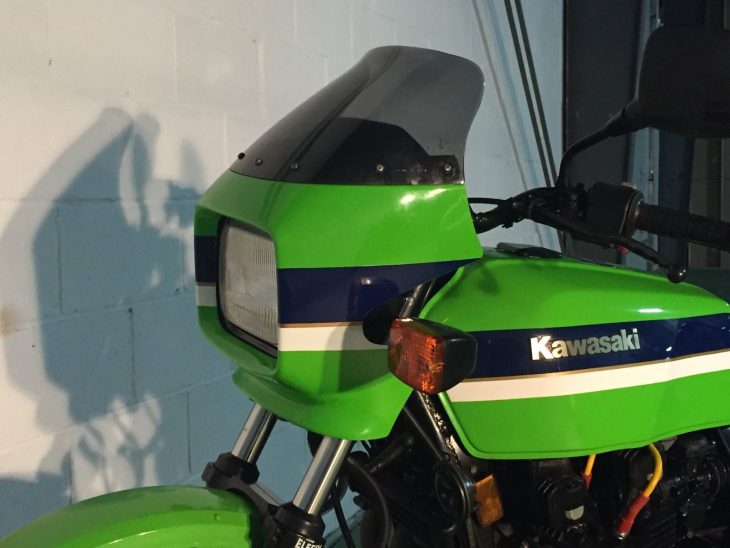 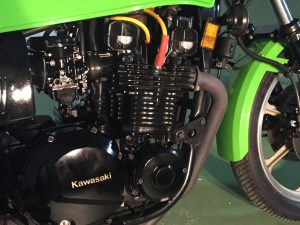 Almost every bike of a certain age has been with a few owners, and this KZ1000R looks to have escaped any abuse.  The 21,753 are about middle of the road for a rider, and it looks quite stock, with a nice Telefix fork brace and newer seat upholstery.  From the owner’s eBay auction:

ORIGINAL OTHER THAN THE TIRES AND YELLOW IGNITION WIRES

IN EXCELLENT SHAPE, WILL NEED A CARB CLEANING AND TUNE UP

INSIDE OF TANK HAS ZERO RUST, I HAVE THE ORIGINAL KAWASAKI MIRROR (not on the bike in the pictures)
TWO SMALL COSMETIC AREAS:
1) SMALL CRACK ON THE UPPER RIGHT SIDE OF THE FAIRING BY THE WINDSCREEN (EASILY SEEN IN THE PICTURES) CAN BE FIXED EASILY
2) SCUFFS ON THE TAIL SECTION
THE BIKE HAS BEEN SPRAYED WITH SC1 PROTECTANT (SOME AREAS WET IN THE PHOTOS) 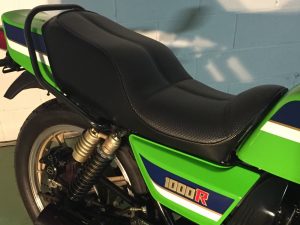 With water-cooling and V-4’s being introduced, the winds of change were howling in the early 1980’s, and KZ1000R’s had to suffer a few years of benign neglect before the interest in retro or just-plain-superbikes took off.  Since then they have been raced, collected, and exported, with the net result of fewer of these special machines available.  The -R reviewed as a stiffly-sprung, torquey ball to ride – up until that last tenth, when the size and weight required an expert rider to push.  With a little elbow grease this Eddie Lawson Replica could be a great rider or with more attention, a powerhouse of a collector.  See the eBay auction – here – and the owner, Mike requests inquiries on  (774) 836-8507… 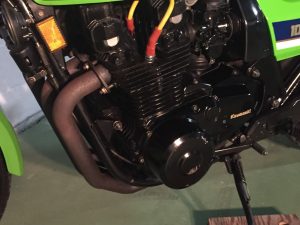