After the retro-styled MH900E of 2001-02, the Pierre Terblanche-led styling department had another epiphany in 2005.  The SportClassic series used the air-cooled 992cc dual-spark engine, and a steel trellis frame, with up-to-date brakes and suspension.  Most of the 2006-09 production was the naked GT1000, with single or dual seats.  The gem of the series was the 2006 Paul Smart 1000 LE, which commemorated the factory rider’s 1978 Isle of Man TT win.  The Sport 1000S was made in 2007-09 in relatively low numbers and while not having the cachet of the PS, it is a rare retro sportbike. 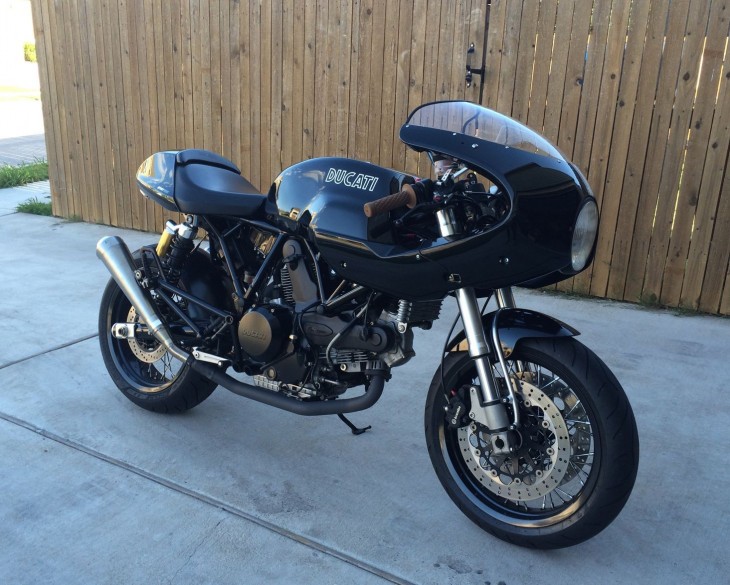 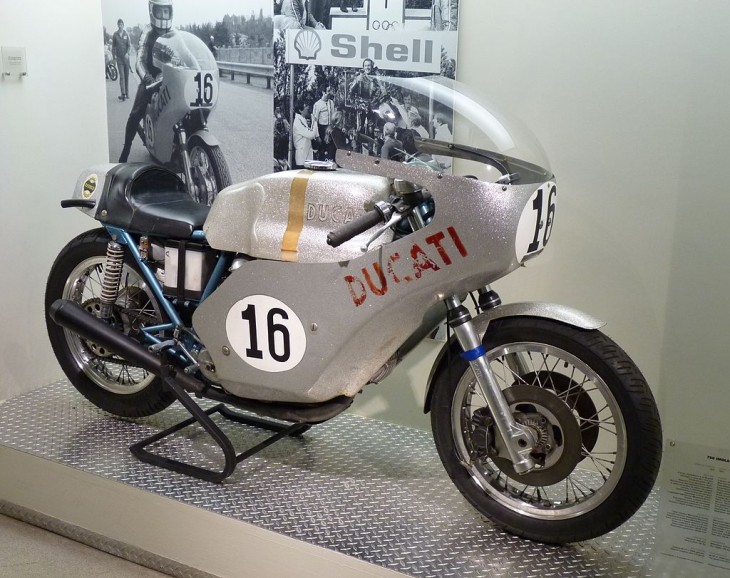 Relying on the 2-valve air-cooled 992, the Sport 1000S sends 92 hp and 67 ft-lbs. torque through a six-speed gearbox, via a smooth(er) wet clutch.  Modern 43mm upside forks are used, and the adjustable dual rear shocks ( and dual mufflers ) have a lot of retro appeal ( Paul Smart models used a single sided swingarm and exhaust ).  Brakes are dual 320mm disks in front with 4-piston calipers, and single 245mm rear disk.  The ’07-08 Sports had a dual seat, but in 2009 Ducati brought back the single seat with cowl used on the PS. 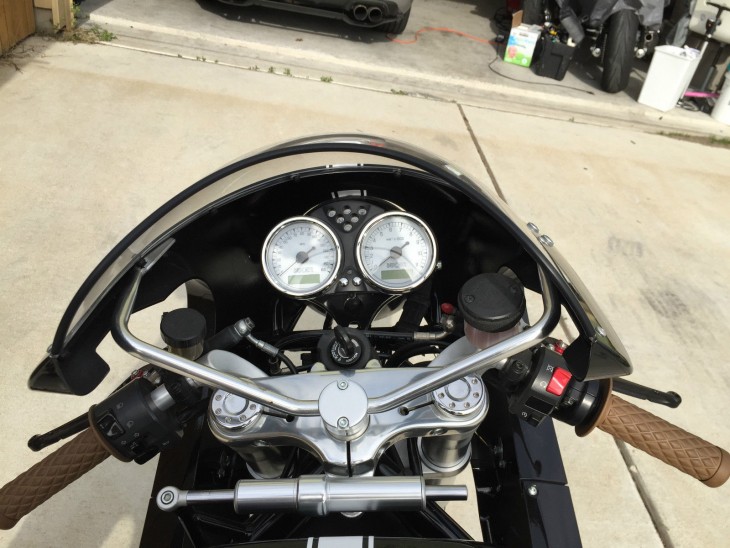 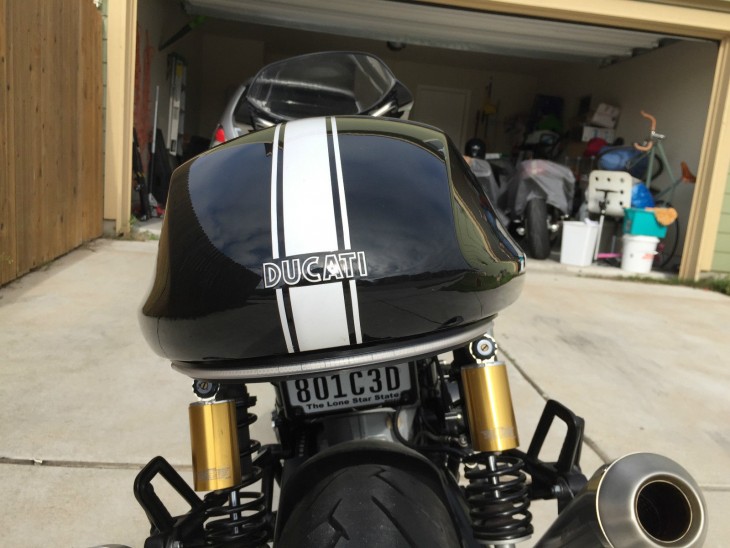 This Sport 1000S has custom turn signals, micro-blinkers smoothly installed on the front fairing, and a fender eliminator kit out back with the brake light and turn signals in an LED strip along the back of the seat cowling.  Sparks stainless steel mufflers are also added.  The fairing has the factory black with white stripe and appears excellent.

This is the rarest of the Sport Classic range. The black Sport classic was produced only in 2009. This example is in pristine condition with all maintenance performed by Ducati Dallas, including the 7500 mile service. Includes a recently installed new Caswell coated gas tank so you never have to worry about tank expansion. Includes – Stainless Spark Exhaust, Fled LED tail light, LED Front Signals, Brown Grips, Mosfet Regulator, Brand New Pirelli Rosso tires. 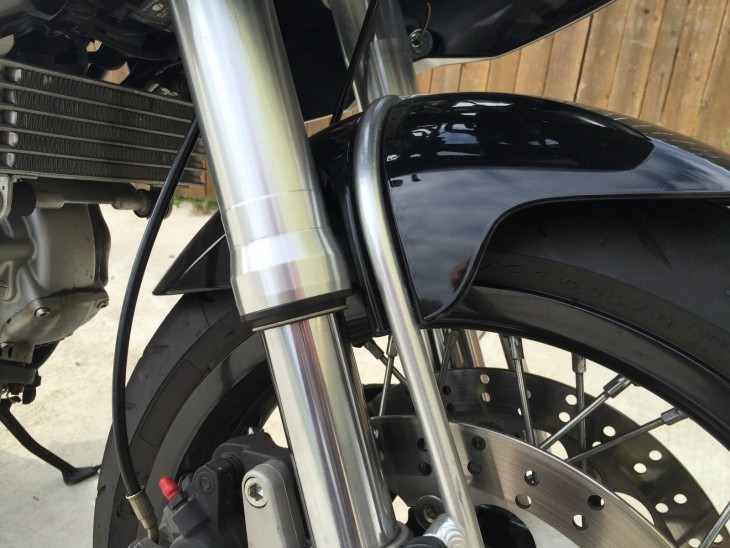 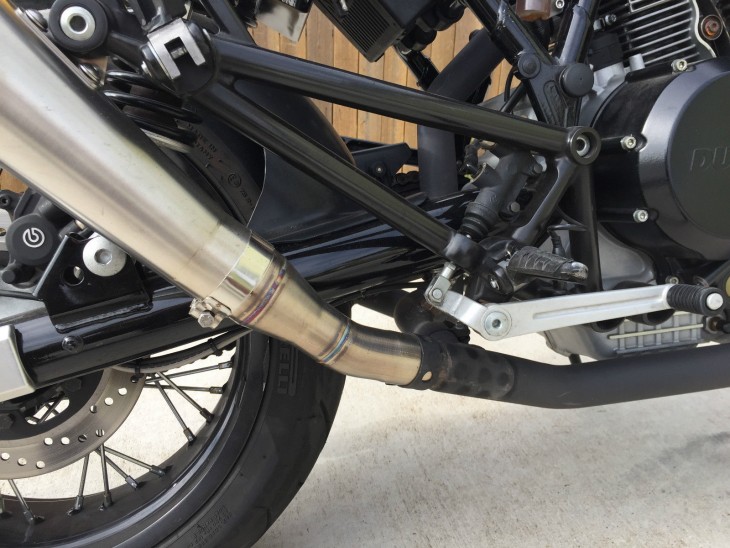 One might argue that the PS 1000LE is the rarest of them all, but any of the Sport 1000S years only amounted to a few hundred, all sweet tributes to a great era, factory-engineered with some modern amenities.  This one is from the last production year, and has had some nice care and updates.