Almost always in black, Aprilia’s pint-size race machine had its own series in the early 2000’s.  With only 550 miles, this one has been spared too much track abuse and looks like a great way to start preparations for the 2019 club racing season. 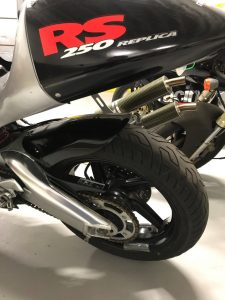 Aprilia developed the RS250 for 1995 model year and the 249cc race replica was immediately successful.  With Aprilia’s own intake and exhaust, the Suzuki-built engine returns 62 hp.  Built like a much larger machine, its pressed and welded twin-spar frame is all alloy, as is the banana swingarm.  40mm upside-down forks and 298mm front disks could cope with more than the reported 130 mph.  Sheared of all its lights, mirrors and accompanying electrics, weight is just 309 lbs. dry. 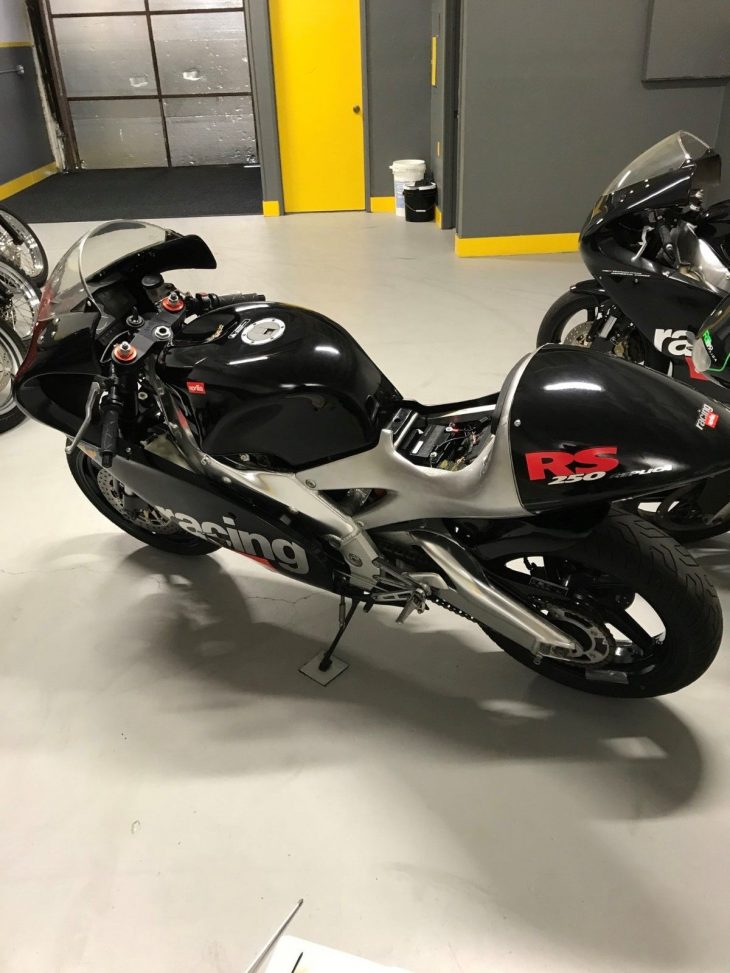 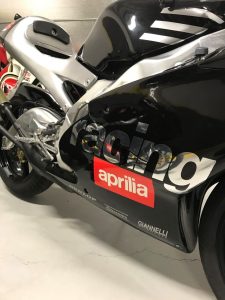 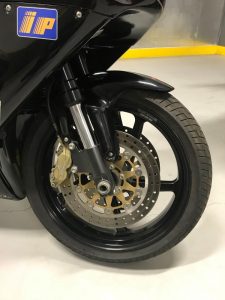 We’ve seen several RS250’s that were put on display from new, and this one is close with just a few tanks of gas in its past.  The owner comments on a few rubs and scratches, but the photos show very nice condition.  Some return-to-duty maintenance has been done, as listed in the eBay auction:

Very limited numbers of Cup Challenge Bikes were produced, and this is one of the lowest mileage examples offered for sale at this time
Cup Challenge Bikes come from Aprilia with 15 digit VIN’s, to prevent them from being licensed as a street legal vehicle (which have 17 digit VIN’s)
884 Original Kilometers on the Odometer (550 miles)
Beautiful Condition
Perfect bike to sit in your living room or man cave so you and your friends can stare at it like a piece of artwork
Bike has slight rubbings, scratches, and road debris indicative of being ridden for 550 miles.
Recently pulled out of long term storage
Carbs were recently gone through by a local 2 Stroke Mechanic to clean them out and to make them ready for some fresh race gas
I installed a new battery, added some race gas, checked the fluids, and the bike fired up on the 1st kick 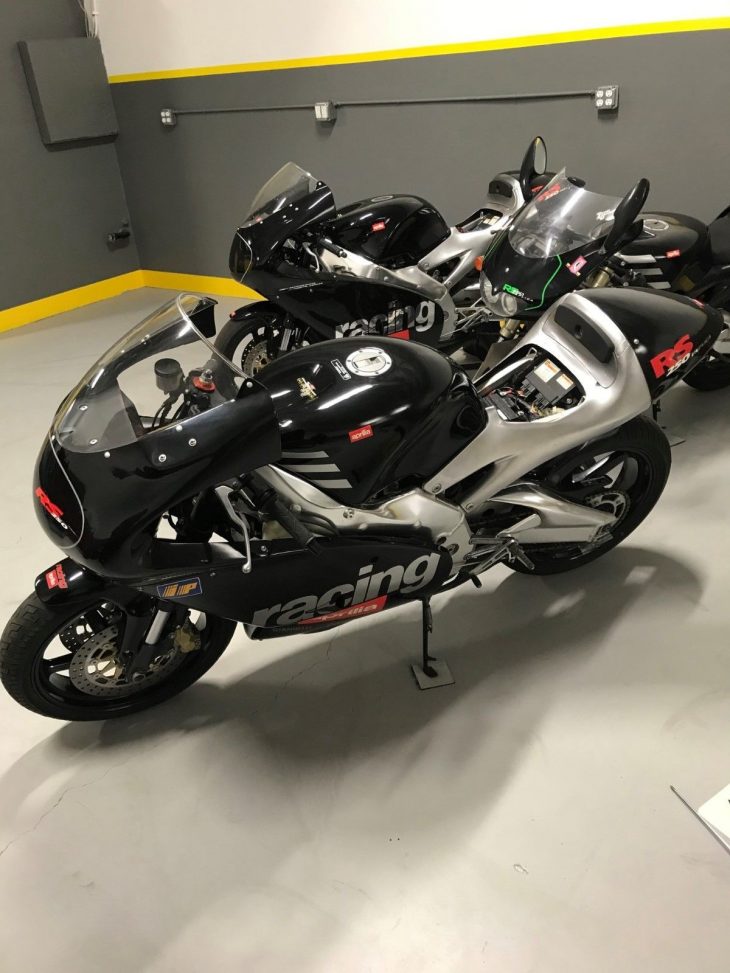 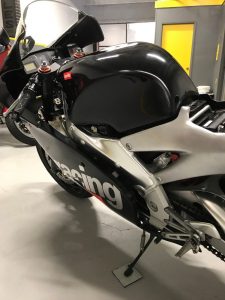 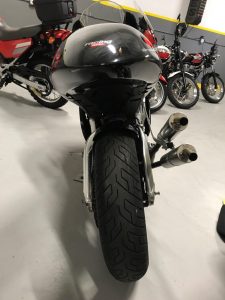 Aprilia brought their single-make series stateside for a few years to gin up interest, and went on to provide sponsorship and contingency prizes as the series matured.  The two-stroke formula was waning however, and in a final comment on the strength of the 250’s, FIM changed Moto2 to a 600cc four-stroke class for 2010.  Maybe you’re thinking of a robust track season next year, and are way ahead on your holiday shopping ?  If so this RS250 looks ready and could make your holidays a lot brighter… 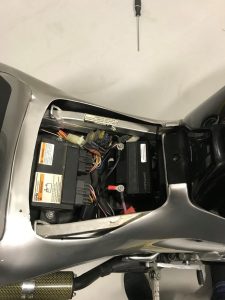 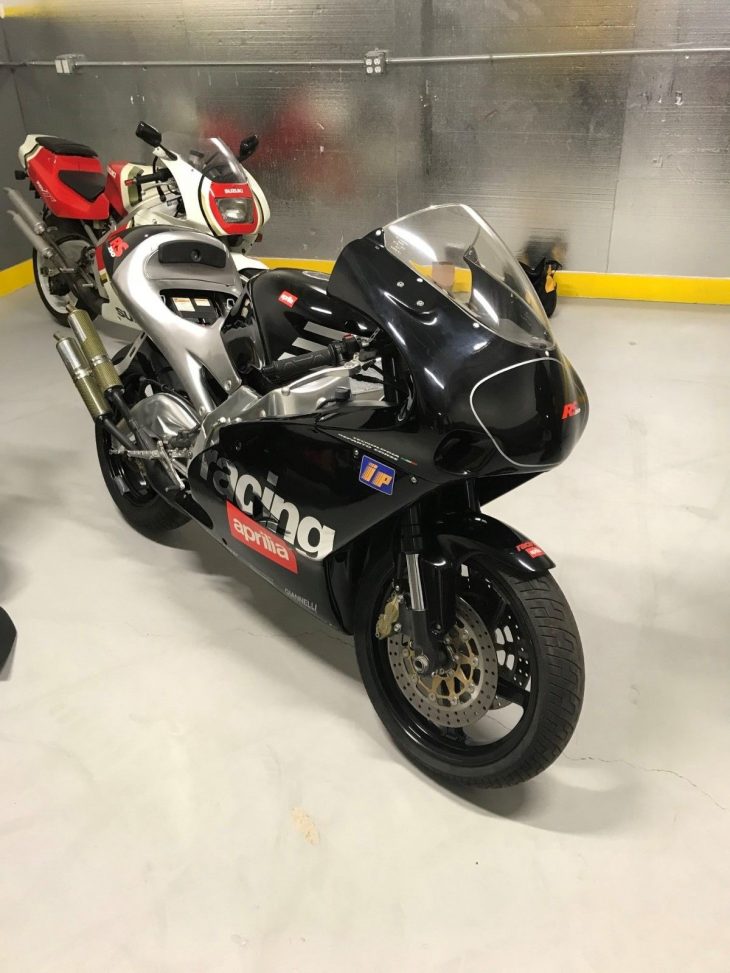