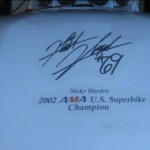 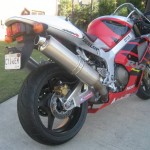 Editor note: Today we welcome a new author to RSBFS. This is Steve’s first post and from the looks of it we’ll be looking forward to his future selections with this kind of taste! Please join me in welcoming him on board! -dc

This is a 2002 Ducati MHE900 and is limited production even for Ducati – this happens to be bike #1891 of 2001. These came standard with lots of trick parts but this one has a quite a few upgrades including a complete carbon fiber body kit and upgraded fuel tank – five gallons instead of three. This MHE900 has 5,433 miles on the odometer but looks showroom new. The Buy It Now price was recently lowered to $12,995. See this Ducati on ebay: More information from the ebay listing:

This is a very special bike! There were only 2000 made and this is number 1891.  When offered in 2001, they sold out online in under 1 hour!  The prices have climbed steadily and this represents a blue chip investment you can enjoy! This bike is loaded with carbon fiber body work complete by Carbon Dream. A Staintune exhaust was added for premium sound and maximum performance.  An upgraded 5 gallon tank was a big step up from the factory tank that held just under 3 gallons.  All parts were purchased through Ducati Corsa including the Ducati high performance mirrors. This bike has been well cared for, serviced at the Ducati dealer (Fast By Ferracci) its whole life.  We have all the service records for this bike since birth along with any upgrade that was added.  We also have all the original body work including fenders, factory tank and more.  The Ducati has just recently gone through inspection and has had regular synthetic oil changes when called for.  There is no other bike out there like this, offering you modern styling and extraordinary performance this is a great one to add to the collection.  This bike holds true to the Ducati name and look.

The standard MHE900 is rare enough but the upgrades done to this bike make it one of a kind. I do however, question the need for a larger fuel tank as I expect the ergonomics to wear the rider down faster than the engine consumes gasoline – or I just might be getting old. Either way, this is definitely a motorcycle I wouldn’t mind adding to my stable…