Admit it, you want one: Honda Motocompo units (3) for sale on ebay. 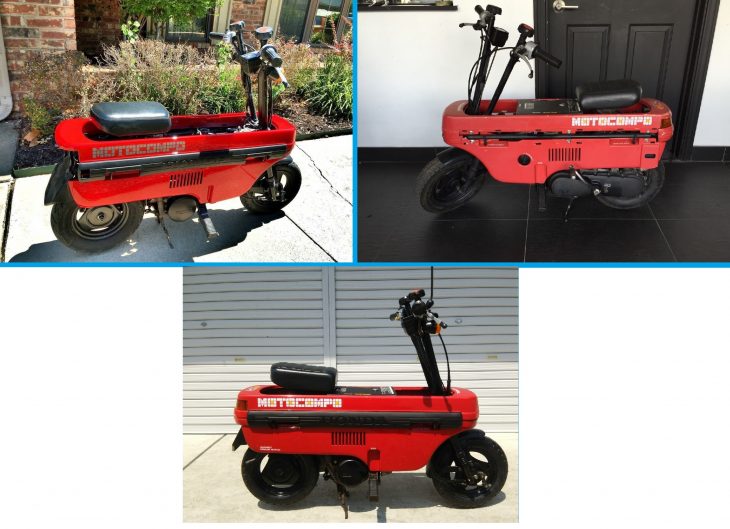 Let me begin this post by saying I expect some fans of this site may dispute whether a Honda Motocompo should ever appear on this site.  Some will probably even suggest I have  managed to place my head in the vicinity of my prostate.   But the typical qualifications for a RSBFS post are usually some combination of the following factors; technology, condition, numbers/years produced, location and/or historical significance and the Motocompo certainly meets as many of these conditions as a lot of other bikes we post here on RSBFS (ex: 3rd gen GSXR750, Kawasaki ZX6).  Obviously it isn’t going to be fast, but damn it looks like a hell of a lot of fun.

Sold for only 3 years , the Honda Motocompo came with a “peppy” 50cc Honda motor but the real appeal of the bike was its folding design with the handlebars, pegs and seats folding into the body, leaving a unit able to fit into the trunks of small Honda/”city” automobiles.  I guess the idea was for places where traffic was incredibly bad (like Tokyo) you park your car at a train station or carpark and then ride this the rest of the way to office. 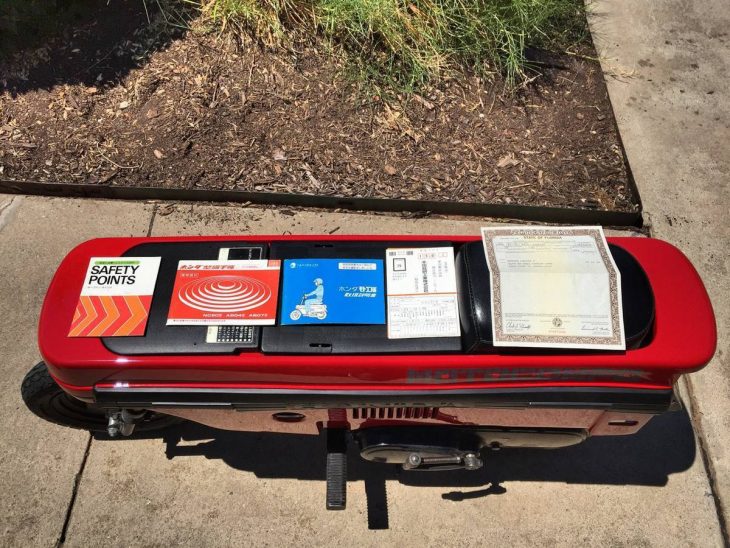 Sales were actually pretty good with an estimated 53,000 being sold by the end of production in 1985.  However the Motocompo was never offically imported into the US so having 3 for sale at the same time on ebay us in the US is pretty unusal.

Note:  For a lot of people, the bike is best remembered for its marketing campaign that included advertisements featuring the 1980’s band Madness, perhaps best remembered here in the states for the song “Our House“. 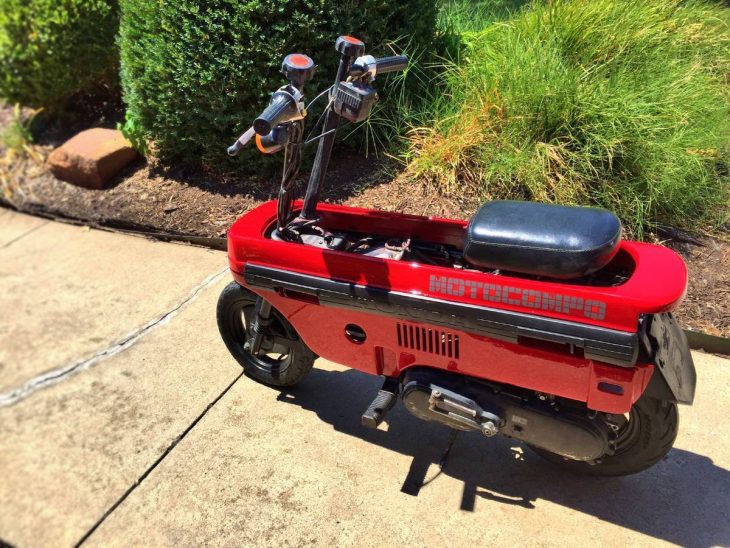 Here is the first one, located in Oklahoma of all places. 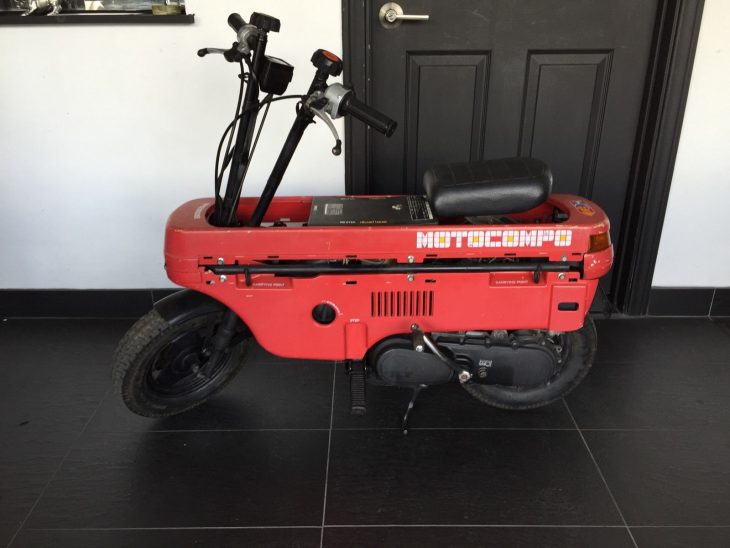 Here is the second one, located near Los Angeles 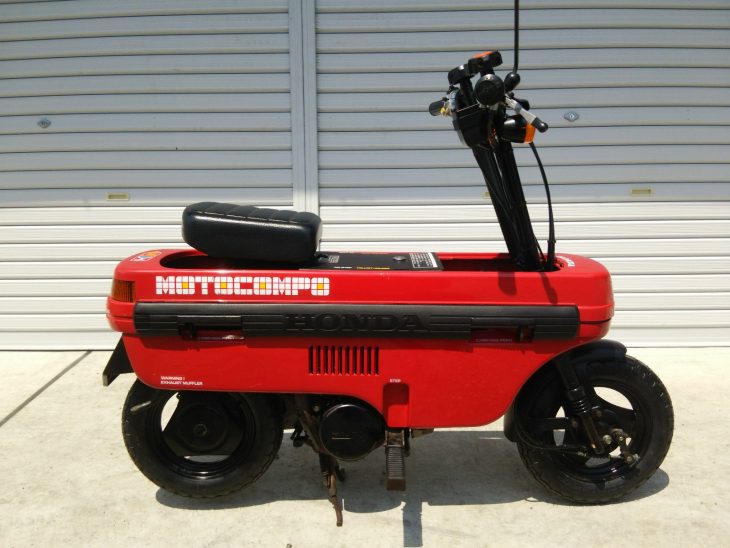 And here is the third one, located in southern california too.  This one has a link to lots of pictures embedded in the ebay post and there is even a video of the third bike running (embedded below). 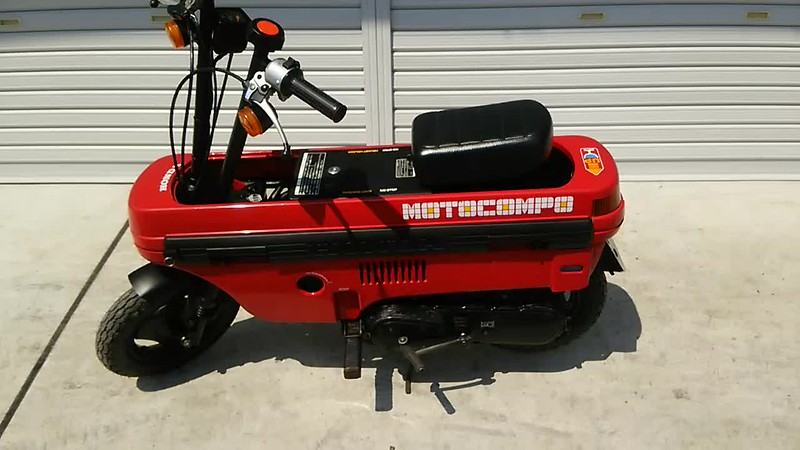 Okay, so now the question – what  is a bike that seems to exist to remind people of Scooter from the 1980’s GoBots cartoon actually worth?   Well this is the first time we have put a Motocompo up on RSBFS and were never sold in the US so historical prices are a bit of a guess.  The only other info I found was an ebay listing from back in April of this year with what looks to be a successful bidding price of about $2,000 USD.   Note – it may be that one of these bikes is that bike again, being flipped by the previous buyer

The current bidding/Buy-It-Now prices for these three are all over the place, with the first and second both being offered with prices over $4500 but having Make Offer options.  The third is being sold as an auction with a price as of writing this post of around $1,500 USD…

Personally I think this bike looks like it would be a total hoot to have around the garage/workshop.  Yes I know the chances of it appreciating in value are about as high as Jen Aniston and Brad Pitt getting remarried but collectors are a funny bunch sometimes and you never really know what might pop in value down the road.   Also something like this might be a fun way to introduce a youngster to riding…or maybe cruise around campus…heck, it might even make a good joke to pull on a teenager who has been nagging their parents about owning a bike (Parents: “We bought you a bike!”  Child: “Wow, you guys are the coolest!”  Parents: “Here it is!”  Child: <crickets>).