We have 15 years of archives. Please note that posts over a year old may have been updated to point to similar bikes available to bid on eBay.
Ducati January 26, 2020 posted by Mike
Share 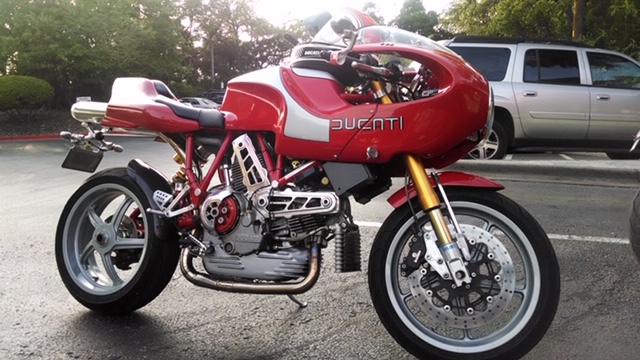 A viral internet sensation, the Ducati MH900e (Mike Hailwood evoluzione) was launched online and sold online – and was an instant hit. Designed by oft-derided South African visionary Pierre Terblanche (also known for the Supermono and 888, as well as the 999 series), the MHe was intended to be a conceptual update to the original Mike Hailwood replica. By all counts Terblance knocked this one out of the park; from all angles – in photos as well as in person – the MHe is an impressive motorcycle. One can get lost all day in the details; from the tank to the abbreviated tail, the waspish waist, the huge shotgun exhausts, the intricacy of the single-sided swing arm to the simplicity of the center-dominated tach – some of the details are clever and downright devilish. The MHe was built around a standard Pantah-based Supersport engine and transmission. The venerable air-cooled, two valve motor is well known for producing gobs of torque and the sort of wonderful noises you would expect from a Ducati. But with unique touches such as a remodeled oil sump that was designed as a nod to the older style of bevel drive Ducatis and a model-specific oil cooler, the MHe engine stands out as a unique entity and a critical design element of the motorcycle. Throw in some retro touches such as the round, chrome-ringed headlight and you have something very interesting that seems to exist both in the past as well as the present at the same time. Additionally this bike has a full Ohlins suspension including FG 845 titanium nitride forks specifically calibrated by Kyle Racing. Ohlins shock and Ohlins steering dampener. The upgraded suspension has transformed the bike and it tracks beautifully. ($4,000 + upgrade)

Full Staintune header/exhaust system. This bike was used to spearhead the header development by getting enough MH owners together with a group buy to put deposits on headers, and then a generous MH owner in Australia donated his bike for the R&D. Great improvement in throttle response, sound and looks. ($1,600 upgrade) 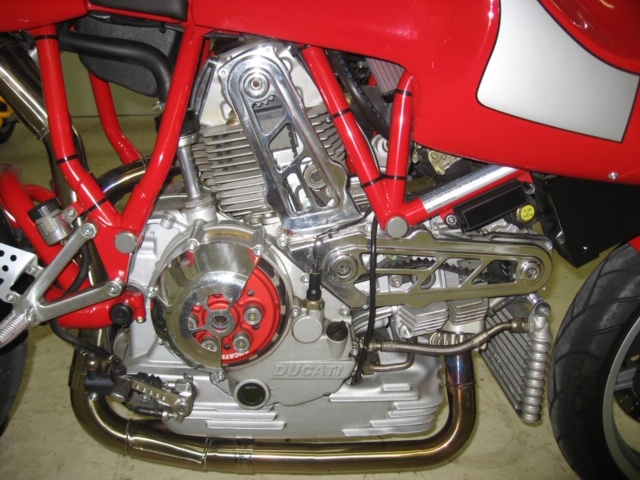 History clearly shows that the MHe was a success. Offered for sale just after midnight New Year’s day of the year 2000, the entire planned production line sold out before the day was even half out. Over the next couple of years, despite some ramp up and production issues, Ducati eventually built 2000 examples of the model (which was more than expected). Ducati initially planned to farm out production of this hand-built motorcycle to fellow Italian constructor Bimota, but when the Rimini firm fell into bankruptcy Ducati created a new assembly area and started to build the bike themselves. It took a couple of years for all of the MHe models to be produced, but even by late 2002 the fanfare generated by this enthralling machine had not abated. 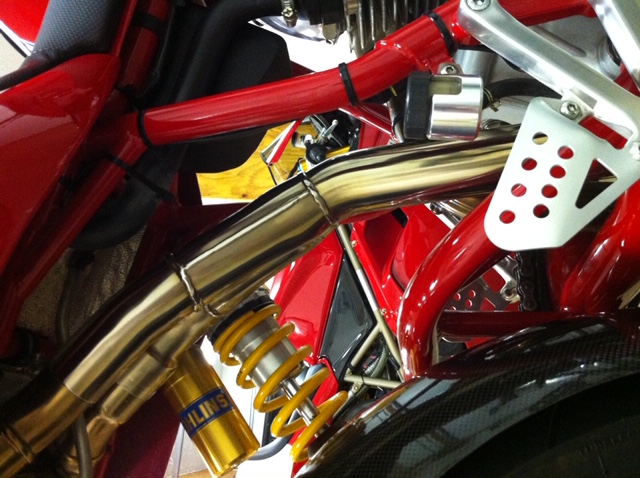 Today’s Featured Listing is a 2002 MH900e serial number 1807. The year and number place it towards the end of production, but as there were virtually no changes throughout the model run it can be considered the same as an early bike. This particular bike has seen some very tasty upgrades, including a shift to full Ohlins suspension (original bikes had either Paioli or Sachs units in the rear). It also has a very expensive and rare Staintune exhaust, and a litany of Ducati Performance goodies. Nearly all of the stock pieces are available with the bike, so those fearing mods need not fret. Unlike some garage queens this one has been ridden, and shows 7,462 on the clock. The asking price is very much inline with current market values, and given the scarcity of these models interested parties should reach out and connect with David quickly. Good Luck!! 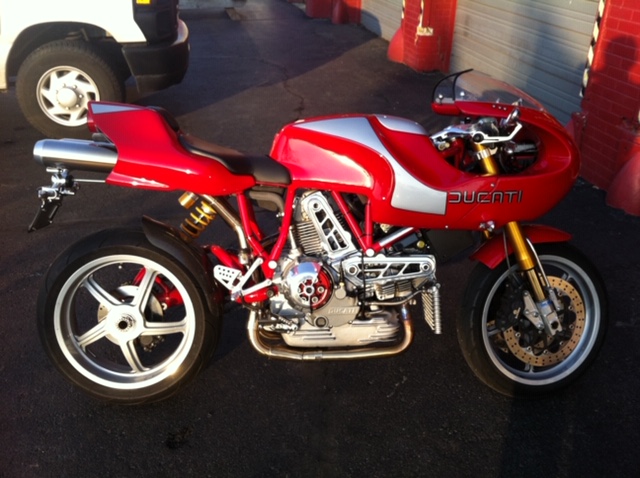 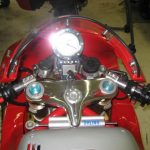 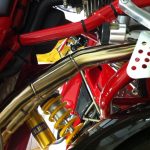 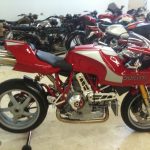 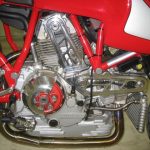 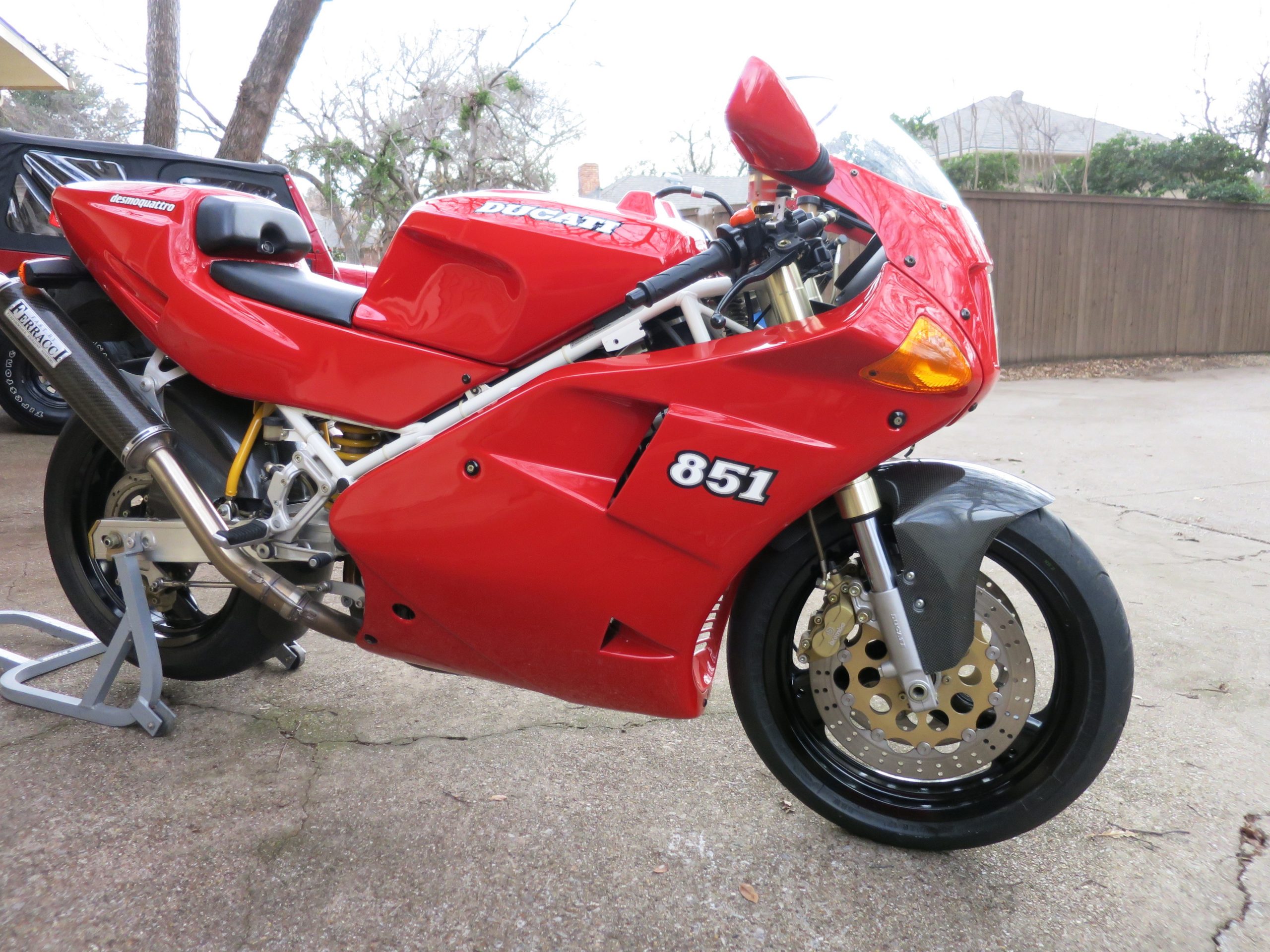 The Ducati 851 is one of the all time greats; a watershed bike that defined a company, dominated a racing class, and lives on as a lust-worthy dance partner in the canyons. Everything about it screams “Ducati” from the miles of blood-red paint to the big, booming exhaust note that only a 90 degree v-twin can produce. The design silhouette is distinctive – and sexy. This is an Italian exotic at its finest, and at its most collectible. And yet this is a bike that you can buy without mortgaging your house, and you can live with day to day. What makes the 851 such a big deal is the manner in which it burst onto the scene. Ducati leapfrogged the evolutionary process by simultaneously moving the Pantah-based platform from air cooling to liquid cooling, from a two-valve desmo head to a four-valve arrangement, and switching from carbs to fuel injection. That is a lot to pull off in one fell swoop, but given the performance, reliability and longevity of these motors it is obvious that Ducati cut no corners. As a result the 851 is a great choice if you are looking for a collector that you can ride. It makes usable power (but not outrageous amounts), offers strong brakes and willing suspension, and a decently upright riding position. 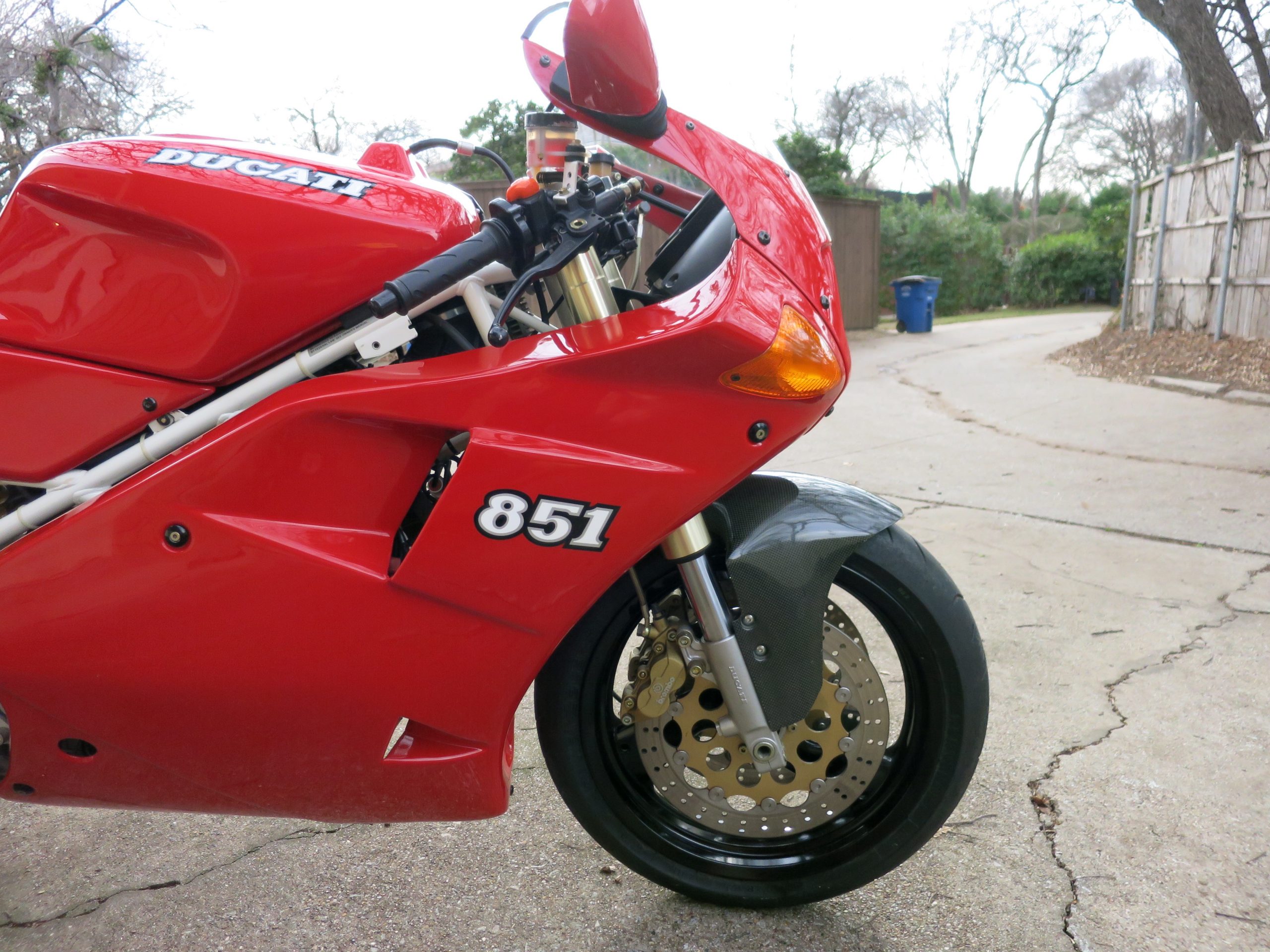 From the seller:
1992 Ducati 851 Strada
This model 851 was only made for two years and only 1200 were produced. This is a two owner bike with the rare Euro tail section added. The original BiPosto seat is included with the sale of the bike.

The Ducati 851 was the successor to the air-cooled two-valve Ducati 750 F1. After buying Ducati, Cagiva invested in the development of anotherV-Twin, but with liquid cooling, and four-valve Desmdromic heads. Based on the Pantah motor, but with liquid cooling, fuel injection, and desmodromic four valve heads (with an included valve angle of 40°), the 851 made Ducati once again competitive in motorcycle racing.

Bordi collaborated with Cosworth to develop the heads, but in the time they had, they were only able to reduce the included valve angle of the desmodromic engine to 40°, while less than 30° was possible with valve springs. Ducati stuck with the desmodromics. The subsequent 851 road bike had stronger crankcases, while the heads and valves remained the same; designed to fit above the 88 mm bore of a 748 cc version.

This particular 851 is a Strada (street) model, but has been uprated with a carbon front fender, carbon mud guard, a sweet Fast by Ferracci high-sweep carbon exhaust (sounds so good!), and a solo section tail. In other words, this particular model is well-suited as a rider. The asking price is right in the ball park for a clean and cared-for example. That is the interesting thing about these models; while the SP4 and LTD models have higher resale value, clean base model Stradas continues to trade strongly. This is a testament to how great these bikes are to ride and own (author confession: my wife rides one as her commuter). Check out the pics of this extremely clean example and then drop David a line – he would love to see this beloved ride from his collection find a good home. 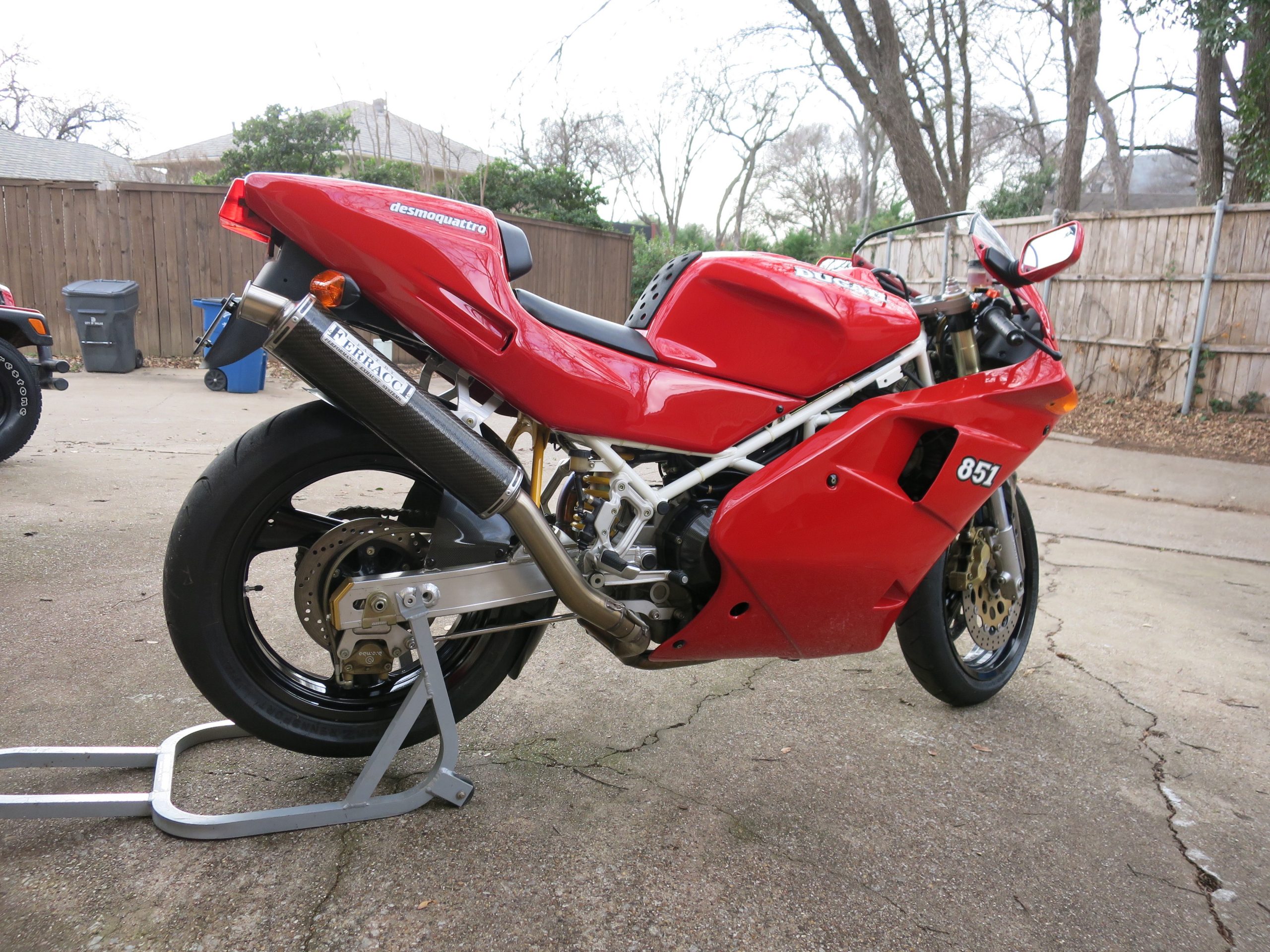 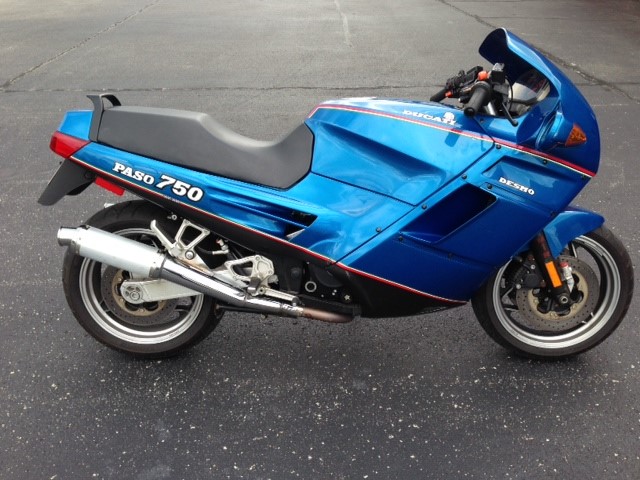 That Ducati Paso 750s don’t get the pure adulation that they deserve from anyone outside dyed-in-the-wool Ducatisti is baffling. Sure, they’re looks might aptly be described as controversial and they never had world-beating power, but their place in motorcycling is as important as any mid-80’s Japanese rocket.

Most importantly, the bike saved Ducati from the scrapyard of history, pulling together the earliest versions of the brand’s modern hallmarks under new corporate ownership. Second, however controversial it might have been, their styling is uniquely Italian, uniquely 1980s and at the time was from outer space. The man who penned it, Massimo Tamburini, went on to give the world the Ducati 916 and the Ducati Monster.

So, it’s safe to say without the oddly charming Paso, with its belt-driven cam engine and fiberglass fetish, the Ducatis we drool over now might never have appeared. If we’ve piqued your interest, this 1988 Ducati Paso 750 is the pick of the litter.

With fewer than 1,500 miles on the dial since new, and wearing the rare-as-frog-hair blue bodywork, this Paso rightfully should end up in a museum. According to the seller, it’s one of just 55 sold in this color scheme worldwide.

This blue model Paso is very limited in numbers with only 55 sold worldwide and only has 1,486 miles which allows you to have a brand new antique. The Ducati Paso 750 was the first road going product to come out of the Cagiva-Ducati relationship, launched in 1985 when Cagiva purchased Ducati from the Italian government. Cagiva rushed to get it ready for the 1985 Milan motorcycle show. The bike has a set of Conti slip ons however the stock exhausts come with the sale of the motorcycle. This is a very comfortable bike for both the rider and the passenger.

Between 1986 and 1988, Ducati only sold 4,863 Paso 750s. It’s important because it was the first Ducati product designed by Massimo Tamburini, co-founder of Bimota, and the man who would go on to design the Ducati 916, and the MV Agusta F4, both considered to be two of the world’s most beautiful modern motorcycles.

For the Paso 750, Tamburini cloaked the entire motorcycle behind fiberglass and plastic panels, hiding all the mechanical parts. For the time, the Paso was packed with state-of-the-art features: square chromoly steel tube perimeter chassis, an aluminum rear swing arm, and aluminum Marvic 16-inch wheels wrapped in radial tires.

The Paso 750’s calling card was in the parts department. The 42mm anti-dive front forks were pretty huge for the era, and there was a stout fork brace built right into the front fender. At the rear, the rising-rate “Pro-Link”-style Ohlins monoshock was adjustable for preload, compression and rebound damping.

It is equipped with the belt-drive Pantah motor which was a strong and capable engine, and known to deliver in the Ducati 750 F1.

The bike’s instruments were nestled in a binnacle that on normal machines would be covered by a tinted plexiglass windscreen, but on the Paso was an extension of the bodywork. They were made up of equal-sized speedometer and tachometer, along with a fuel gauge.

The Paso was lauded as “the best-equipped Eurobike ever to take on the Japanese in the hotly contested 750 sports market.” Owning a Paso today is something of a labor of love. They’re also mechanically reliable. The carburetor–an automotive Weber two-barrel pressed into duty running both cylinders.

The Paso is a fun, unique, and totally ’80s ride for not a lot of cash. Riding one never fails to elicit a thumbs up, and an appreciative glance from the crowd at your local European bike night.

For all that beauty and rarity, our buddy David is asking for just $5,500. That’s half what you’d pay for a grey market Japanese two stroke, and this one is twice as clean as most smokers you’ll come across.