Updated from the RD350 in 1983, the liquid-cooled RZ350 was a pint-sized powerhouse for the company, and though it wasn’t sold after 1986 in the U.S., it stayed another 10 years in other markets.  Yamaha has returned to the Kenny Roberts-era yellow and black for their anniversary this year, but you’ll need connections to get that signature on your new R1 or R6. 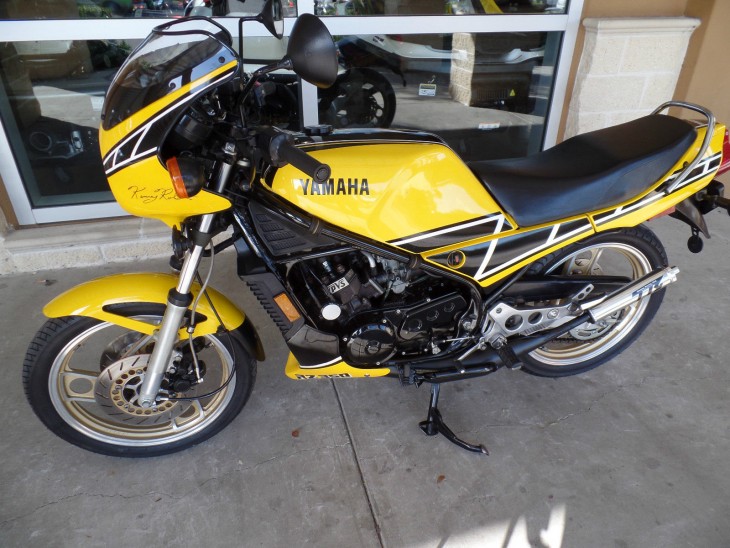 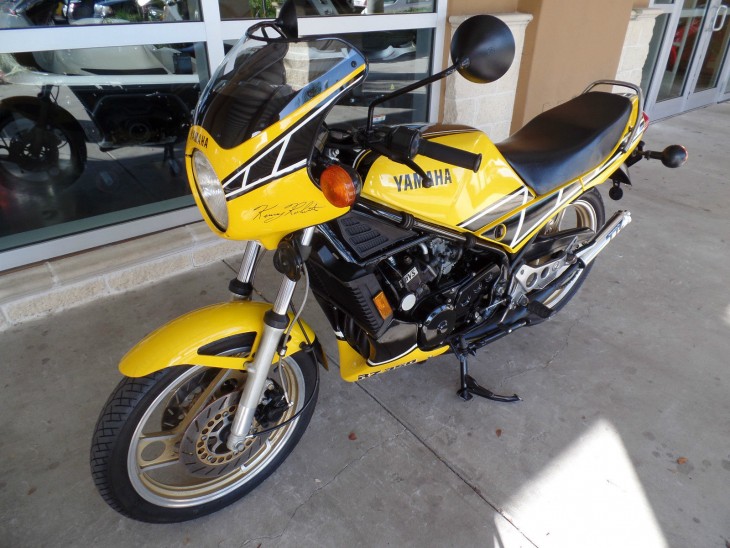 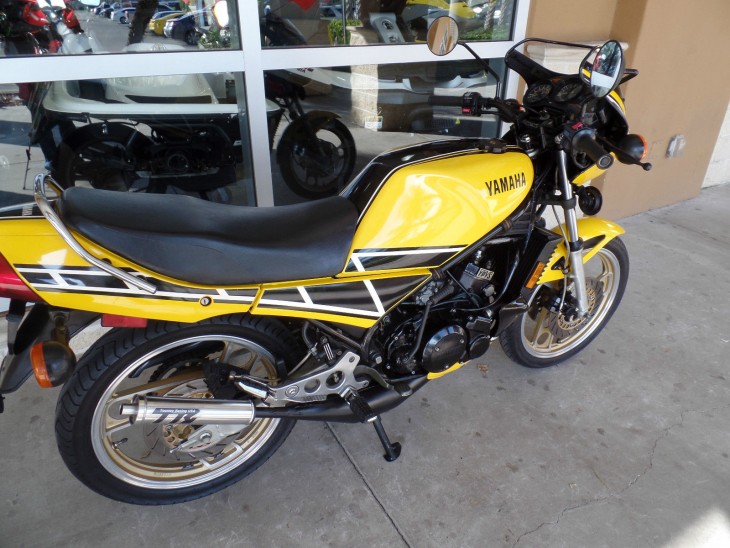 Putting a big fun factor in the small displacement end of the dealership, the RZ350 put 60hp under a 375 lb. motorcycle.  The two-stroke twin had oil injection and YPVS, Yamaha’s electrically variable exhaust port which helped stretch the power delivery somewhat.  Each muffler had a catalytic converter, and a temperature alarm to keep the cats under control.  The frame had four light tubes around the engine, a forerunner of the perimeter frame to come.  The lightweight theme continued with aluminum wheels same size front and rear.  Forks are conventional with rear monoshock, and brakes are dual front disks of 267mm with single rear.  The bodywork is beautifully designed, handlebar-mounted bikini with chin fairing trying to send some air over those pipes.  Side covers and seat fairing stretch the color scheme to the taillight. 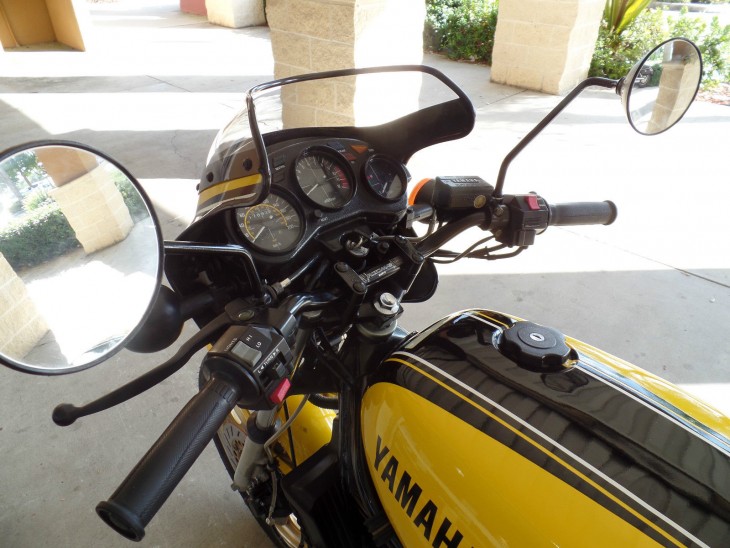 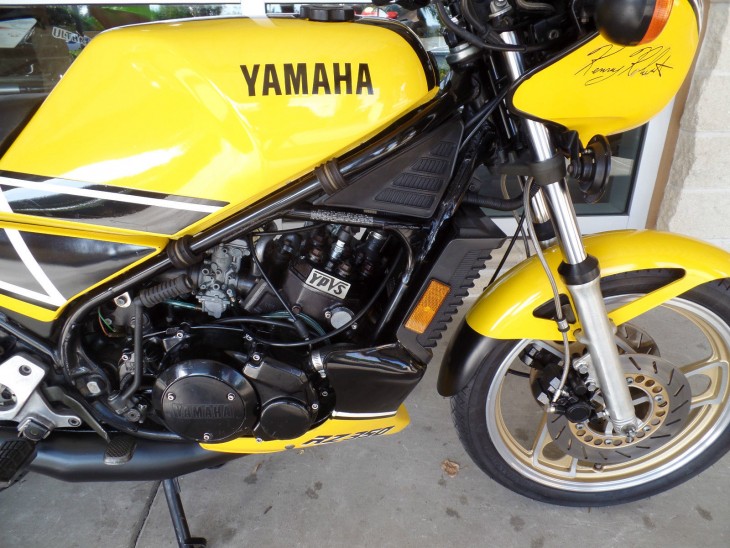 The RZ350 on offer looks great for its 30-plus years, with expansion chambers and Rizoma handlebars.  Bodywork appears undamaged and smaller plastic bits appear to be all there, must’ve been garaged a ways from the south Florida sun.  From the eBay auction:

WHEN ONLY THE FINEST WILL DO.  ABSOLUTELY STUNNING ORIGINAL 1985 YAMAHA RZ350 KENNY ROBERTS.  THIS ORIGINAL RZ350 IS AMAZING.  ORIGINAL PAINT.  NEW BRIDGESTONE BATTLAX TIRES FRONT AND REAR.  ONLY 17K ORIGINAL MILES.  STARTS FIRST KICK.  EVERY LIGHT, TURN SIGNALS, HORN WORK PERFECTLY.  THE ENGINE RUNS FLAWLESSLY.  TRANSMISSION IS SMOOTH SHIFTING.  SEAT IS PERFECT.  COMES WITH TOOMEY EXPANSION CHAMBERS.  ANY SPOTS OR MARKS YOU SEE IN THE PICTURES IS JUST REFLECTIONS, THERE ARE NO SPOTS OR MARKS.  TAKE A CLOSE LOOK AT ALL 24 PICTURES.  THIS MAY WELL BE ONE OF THE NICEST RZ350 ANYWHERE. 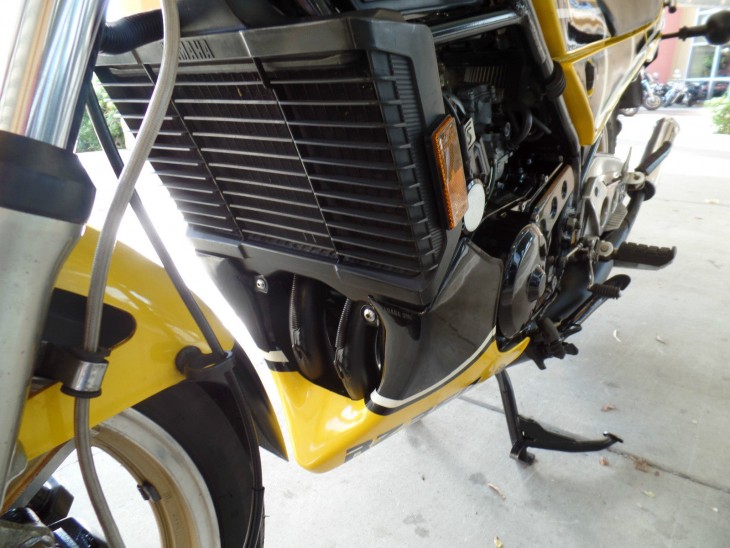 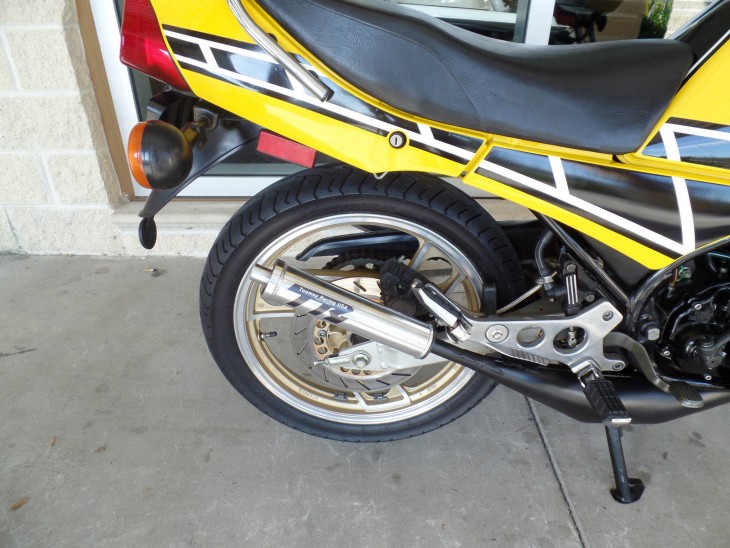 At least looking lighter than the fully faired F1 model that followed, the RZ350 reviewed as a sweet handler and despite the YPVS, a little sleepy below 5000 rpm, but then pulled nicely right to the 9500 rpm redline.  The peaky Yamahas were wrung out on the street and track, and it’s rare to see one in this kind of shape.  A bargain at more than double the 1985 MSRP, like you needed an excuse to go to Naples this time of year…