We’ve seen enough Bimotas around here, but nothing compares to this find – a genuine Bimota HB4 (the ‘H’ standing for the Honda 600c.c. race spec engine in it) Moto2 GP race bike! For those who may not have been following MotoGP, Moto2 is the new controversial (controversial because it conflicts with the World Super Sport 600c.c. class) GP race class that will replace the 2 stroke 250c.c. machines.

The Bimota HB4 was created specifically for participation in Moto2 racing, and it is the only new Bimota to carry a Honda engine in the last 27 years (its predecessor – the HB3 – was introduced in 1983).  In any case, I’ll let the pictures do the talking: 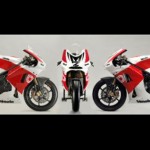 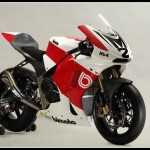 From the seller (translated from German using Google translator):

Offered here is a complete ready to race, moto racing 2. Bimota Moto 2 HB-4. Two similar vehicles will ride in the Moto 2 World Cup. Driver: – 1 76 BERNAT MARTINEZ (E), MAQUINZA-SAG TEAM – 2 Ratthapark Wilairot (TH), THAI HONDA PTT SAG, – This is offered here Bimota Moto-2 is produced on request, and has approximately 10 weeks delivery from receipt of the deposit. The vehicle is built up by HPC-Power. The frame is made of high quality aluminum and molybdenum Crom milled parts. A 145-hp, 600 cc Honda engine, Ohlins TTX shock, Paioli gas-fork, magnesium forged wheels, Brembo monobloc brakes as standard. The engine management system is realized through a high-quality Motec system. The data recording and dashboard features will also be realized by the famous Motec ADL. Functions such as, tractioncontrol, launch control and brake assist are standard on WM. Many other technical features can be identified if interested. The purchase price includes three race days in which the vehicle through two Renningineure of HPC power is adjusted to the buyer. Chassis, and engine management Trachtionskontrolle be adapted perfectly to the needs of the driver. – If you are interested please call Motorcycle Hertrampf in Nordhorn

How the seller got their paws on a genuine HB4 I’m not sure, but I do know that this is probably a once in a life time oppourtunity to owning  a first year Moto2 race bike. 169,000 euros is a lot of money, but for some rich collector, I am sure it’s worth the price. I’d be all over this if I had that kind of money!

Click here to see the ad for this amazing oppourtunity!