I’ve been meaning to post this cool old Honda VFR for quite a while. It sports the same colors my buddy BV is lusting after on the 2007 anniversary edition VFR800: Classic white with blue and red details with the gold Honda wing logo.

This particular VFR400 is a pretty special model because it was never offered for sale in the states, and it sports some very cool features like the single-sided swingarm, V4 engine configuration, and rev happy 400cc motor. Check out this Honda VFR400 NC24 for sale in Kansas City on Craigslist ($3500): 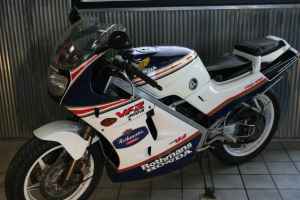 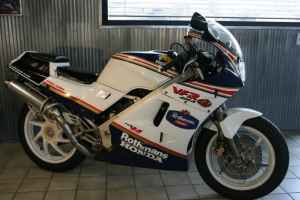 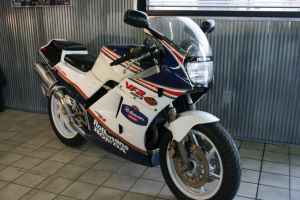 *First things first, this is not an 85. According to this Wikipedia article, the NC24 wasn’t introduced until 1987, and this bike definitely sports all the important features of the later NC24 model. But when I first saw the listing as an 85, it made me wonder if the 25 year rule works the same way it does for classic cars in the U.S. – no import or registration issues with models not previously imported. Anyone know for sure? Also, was there a Rothmans edition of the NC24?