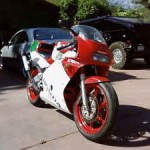 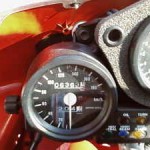 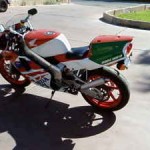 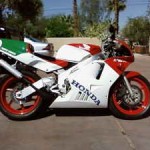 Is this the same bike I posted earlier last year? This is a serious price drop if it is.

These are getting cheap enough that it’s getting harder and harder to make excuses about why there isn’t one in my garage. Obviously with the sheer numbers of 2 strokes listed on this site, you know I’m a fan. Talk me out of a gray market 2 stroke… or can you at these prices? 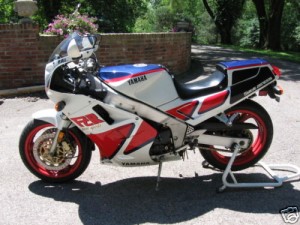 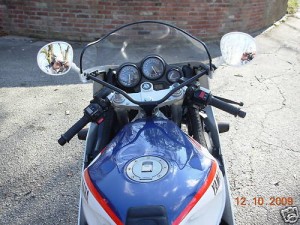 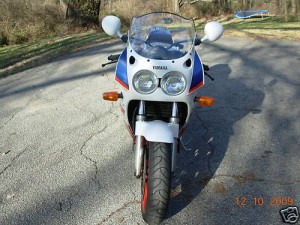 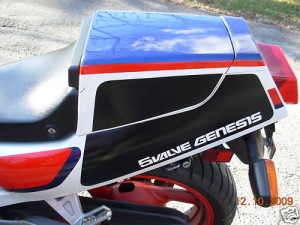 An explosion of race replica, special edition Ducati’s have hit the radar this week. Check out these fantastic Ducati Superbikes for sale right now: 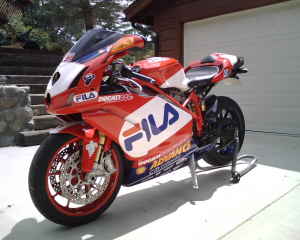 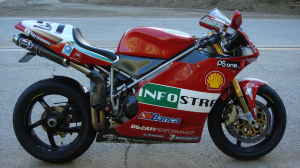 2002 Ducati 998s Troy Bayliss, #349. This bike has 4k miles, and is in mint condition. Extras include, carbon fiber airbox, air runners, hugger, swingarm guard, and under tail. All carbon accesories are ducati parts. Termi 1/2 system, as well as forged Marchesini Magnisium wheels. This bike is a very fine example of a Bayliss edition. 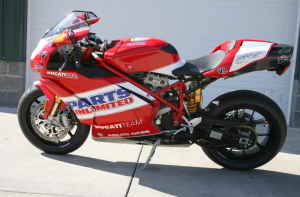 This is another piece of rolling history, a 2007 Ducati Team USA Limited 999S Superbike. There were 150 of these bikes produced, all of them sold only in the USA. None were exported. This is the write up from Ducati on the stock version of the bike. With 414 miles from being new, our’s also has the Termigoni 57mm Carbon Fiber full exhaust system, Power Commander, has been dyno tuned, has a 520 Chain and Sprocket conversion and the custom upper triple fork clamp that raises the bars 10mm. The first service was just completed and the bike is ready to be ridden or put on display.
The 999s Team USA edition is closely designed and based on the race bikes used by both the Bostrom brothers and Neil Hodgeson during the 2005 and 2006 AMA Superbike seasons. 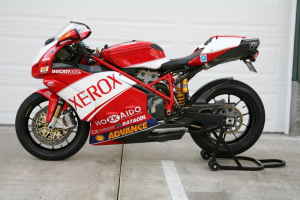 If you have not been to visit our warehouse, this Ducati Xerox 999R, #58 with 1387 miles, is another reason you should drop by soon. Another rare slice of modern motorcycle history is now being offered for sale at Automania. The 2006 999R XEROX Ducati Superbike is the customer homologation replica of Troy Bayliss’ FO6 World Superbike Championship Motorcycle that he used to dominate and win the 2006 WSB championship.
It has fundamentally the same specifications as the standard 999R but with the special XEROX badging and a few other mechanical differences

I’m really not knowledgable about the values of these bikes. But they are obviously collector examples that will command some premium in the market. Which one would you pick as best value? 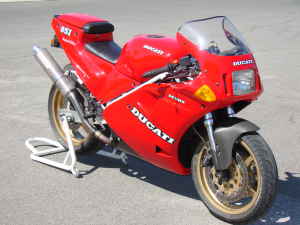 I didn’t even know Honda made such a cool bike! I need to expand my knowledge about sporting bikes that are even less known than the standard Japanese 2 stroke I guess… 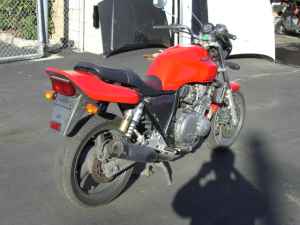 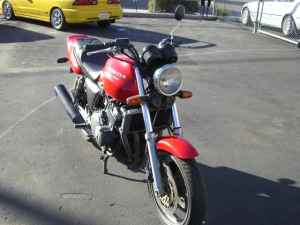 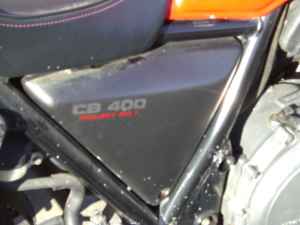 1994 CB400, red, super four.
77K kilometer, carb is rebuilt and everything was adjust to good spec 3yr ago, but never ride ever since.
hasn’t start for few years, needs some tune up to run.
Rare than NSR250, or anything else.
Gaurantee good engine and transmission, just need clean up the carb and oil…
Import from Japan gray market, not register.
very nice bike and rare, no time to finish it up.
Bike is in San Diego, CA.
bring your truck to pick it up, we help you to load it.

Now granted that’s 47,845 miles and no title. But with all the 2 strokes that have been showing up with titles, surely it can’t be that hard to pull off. This would be such a cool in-town commuter bike!

In a bad economy, the toys are apparently the first thing to go. Here are two more Honda MC21 NSR250’s for sale in California. 93 NSR250 MC21 SE no title(temporary plated, Title will be issue on Feb)
sold as track bike at this moment, oil pump has been remove pre-mix setup,
Rebuild engine, new gas kit, spark plug, brake pad, chain
bike runs strong and super fast
PS* pic color is too sharp, there are some minor flaws cant show.
cash 5000 firm with title and plate or just the track use for 4500 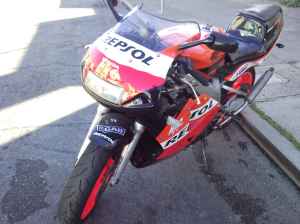 Judging from the pictures alone, I like the Rothmans replica better from the point of aesthetics alone. For around five grand, neither one seems like that bad a deal considering they both have titles!

Here’s another rare sportbike out of the San Francisco bay area; another 1993 Ducati 888 SPO for sale on Craigslist: 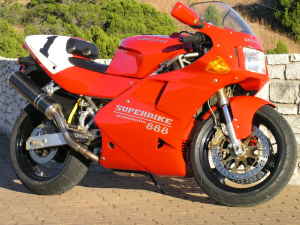 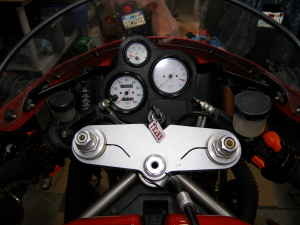 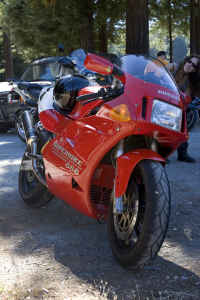 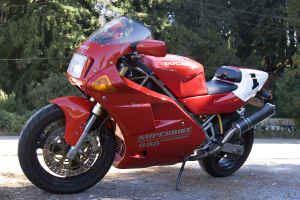 FOR SALE: A beautiful 1993 888 SPO with 13,700 miles. Your chance to own a piece of history, the last of the hand built Ducatis and the father to the 916. 1 of 200 imported into the USA in 1993 to meet homologation requirements for AMA racing. A truly special machine that helped Ducati win the World Superbike Championship in 1991 and 1992, hence the #1 on the tail section.

Purchased in 2000 with 5,200 miles. Service records since then for major service intervals i.e. belts, valves and throttle body synch done by BCM Ducati in NH as well as by Desmoto in San Francisco.

Bike is stock and in excellent condition. Some minor scratches and chips from riding it. Runs perfectly and is very clean. Has factory rear stand included. Sadly it must go since I only have room for one Italian mistress in the stable.

Please call or email me for more details and pics. Pipes and front discs on bike in photo are not stock and not included.

With a $10888 asking (clever), this is one of the more expensive triple eights to be listed on this blog. While most Ducatisti will agree this where they should be, I think this seller may have a long wait before finding a buyer considering what other examples here in the states have been going for.

A Pair of Ducati 900SS Superlight’s For Sale 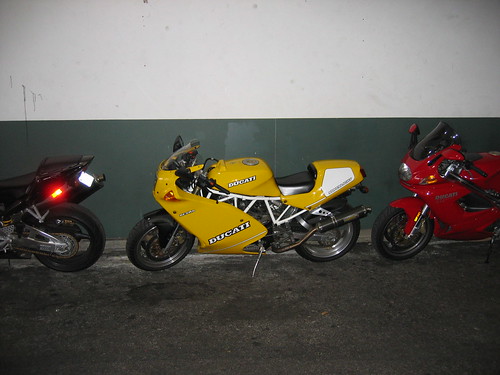 While I was up in Seattle recently for the International Motorcycle Show, we stopped by Ducati of Seattle. I spotted this nice looking Superlight for sale in their garage: And the second Superlight on the radar today I had originally spotted a year ago on my old blog. While fairly pricey, you can’t deny the miles: 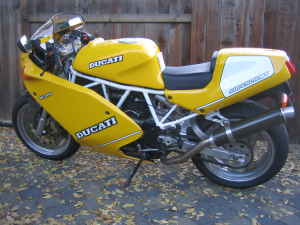 1993 Limited Edition Ducati 900ss Superlight . Only 2200 miles. Certified and documented from original owner Bradly Krasus finding partners of Kinko . Currently registered and titled. Bike was purchased from Santa Barbara Dealership and remained in CA entire life. There are unique features on the Superlight limited edition and not easy to find in such condition and low miles. Excellent addition to any collection .

These are pretty rare bikes and I think it’s an interesting opportunity for a prospective buyer to consider a well worn example or the museum piece.

Update: This post is pretty outdated. Check out these Ducati SuperSports on eBay right now: