This seven year old Katana has seen less than 200 miles!

Now, this isn’t a very collectible bike (To mainstream collectors…) but it has been hardly used in the last seven years.  The seller states that this bike has been in storage for years, features some after-market parts such as a Yoshimura exhaust system, and that offers will be considered.  The last bit of that sentence is the most important, the asking price of $5,000 makes this Katana the most likely candidate for the “Most expensive 2004 Katana in the U.S.” competition.  KBB retail (For what it’s worth) for this bike is $3,015.  Granted, KBB doesn’t really apply to the majority–any–of the bike featured on this site, including this one, but a $2k premium is all the money for a bike with less than 200 miles.  This bike probably isn’t the only forgotten Katana with low miles, so keep that in mind if you’re interested.  The bike does have some after-market parts and stickers–for some reason–which doesn’t inflate the value at all, but if your significant other wants a bike and you know that they probably won’t ride it anyway, this bike might be perfect for you if you can get it for a good price.  See the bike on Craigslist here. 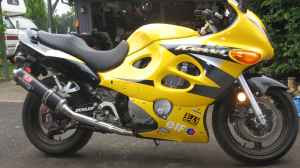 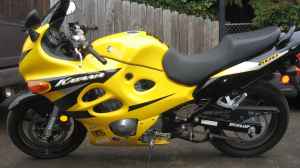