If I drink enough beer tonight, I may convince myself to buy this. When I became interested in sportbikes years ago, this was one of the ones. One of the ones that you tell yourself in high school that you’ll buy someday when you have a real job as you serve fast food through a drive through window. Of course at that time, I still had hope Aprilia would wise up and bring the bike to the states. By the time they did, it was as a race only model.

I happened onto this one on eBayMotors. It’s a 1995 Aprilia RS250 for sale in Portland, Oregon: 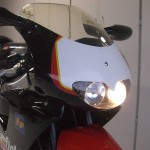 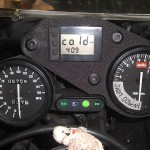 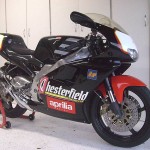 This is a titled, registered and fully street legal 95′ Aprilia RS250 Chesterfield Replica. We have owned it for several years now and have had lots of fun with it. Its a great bike to ride handles like a proper race bike should.

Our friend imported it from Europe about 8 years ago and registered it in New York but didn’t ride it enough to keep it. We shipped it out here to Portland Oregon and have enjoyed riding and playing with it ever sense.

The engine was completely rebuilt in 2006 (less than 800 miles ago) from the crank up using all OEM parts. All the cables have all been replaced as they have worn out and and its carbs and injection system have been tuned and synchronized . The bike is still using the original oil injection system which of coarse works perfectly. Arrow pipes have been polished and nickel plated. This bike has a only a couple of small expected cosmetic faults but its still in great shape and always starts on the first kick!

Oh man… I’m very tempted to get myself the best xmas present ever and buy this before the auction ends in a few hours. It’s even titled and street legal. It’s only a couple hours away and I’ve taken all of next week off… But I probably won’t though, so I’m posting it here in case someone else can snag it.