The last time Mike contacted us, he was listing his GSX-R 1100 that looked flat gorgeous. This time, he’s got another survivor for us in the shape of 1990 GSX-R 750. While this one has covered nearly 21k miles, you can tell it’s been well taken care of in that time. 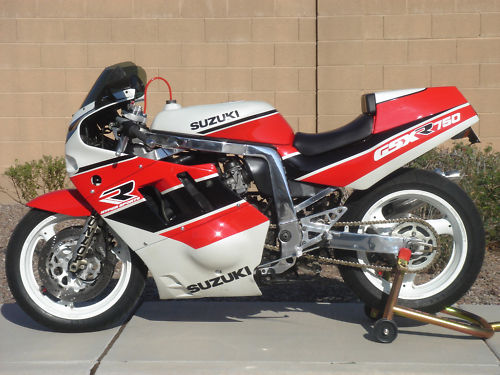 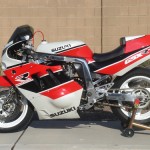 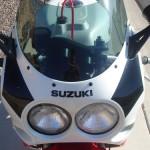 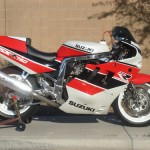 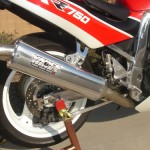 1990 Suzuki GSX-R 750 for sale. We picked this bike up off of a friend who was going over seas and needed some quick cash, so I will list as much information about it as possible. It had come from California as he had owned it for the last few years and was taken care of. We also checked the Vin with our local Suzuki rep and it cam up that it is a 49 state model. We have only had the bike for the last month, and I have put about 1k on it in a few trips up North. Runs well and really needs nothing. I will list below what the previous owner stated he had gotten done before he left and what we can visually confirm. The bike is actually really stunning as you do not see too many Suzuki’s in this color combo.

Low Mileage for the year, and well taken care of. Bike has 20,956 miles, and has newer tires with less than 500mi on them. Tires are Pirelli Diablos with a 180 rear. Forks seals were recently done, and carburetors run good for our altitude here. So no cleaning is needed. Bike is being ridden every few days. Chain and sprockets were done within the last 4000mi. Front brake rotors were upgraded to the drilled ones from later years, and we do have the originals. Frame and Swing-arm look to have been polished at one point and has some real luster to it! Looks good. Bike does have a Vance&Hines SS2r slip-on, but as far as we know all the internal carburetor parts are still stock. Rear turn signals have been relocated to under the tail section but have not been drilled into the plastic! Plug in’s for the front turn signals are still in the front but we do not have anything hooked up as we do not like drilling into factory plastic. We did get the passenger equipment with the bike, but it is not installed. Bike is factory Red/White/Black and has some real good shine to it. Bike does not have the rear seat as we did not get that, and it does have a Suzuki cowl on it. Bike does have a few nicks here and their, and I will post pics to show what I can find. The only real thing is that the left mirror housing is discolored and a little bit of the mirror at the bottom is discolored. I also noticed that some paint has lifted and was touched up right were the tank vent is. I will post a pick and we did not do the touch up! Fender has a few marks at the very front shown in pic. I just want to point out what I have noticed, as we have not done anything to the bike ourselves.

and SuzukiCycles.org had this to say about the final year of this body style:

The GSX-R750L was possibly the best of the oil-cooled models. Big changes included inverted forks and, importantly, a return to the long-stroke motor (the short-stroke wasn’t so good in race-trim but was OK for the road). Other modifications included a 4-1 exhaust, steering damper, 38 mm carbs (up 2 mm on the standard K yet 2 mm smaller than the RK), smaller valves, new conrods, lighter pistons, large capacity oil pump, larger curved oil cooler and the rear rim became the ‘standard’ 17″ x 5.5″ item. Power was up to 115 hp at 11,000 rpm while weight was down to 193 kg.

The bike sounds like a really honest example. While not totally stock, most modifications are period correct anyway. And with a buy-it-now of only $3500, I’d say this is a damn good price for a modern-classic rider that’s ready to go.

Good luck with the sale Mike!