Price: $3500
Location: O’Fallon, MO
Mileage: <20,000 This is RSBFS fan Neal's baby and he is reluctantly selling it. Decked out in Classic Kawasaki Racing colors and ready to hit the road is Neal's good looking H1. Now for those of you who aren't familiar with the H1's, these started it all for Kawasaki and Muzzy with Doug Chandler at the helm. That's right, although the later versions K1, K2, M1, M2 and N1's garner more attention and have a certain savoir faire about them, it’s the H1’s that paved the way. I’ve always been a Kawasaki fan first and a Yamaha fan second and I fancy these early 7’s. Logging an average 952.38 miles a year, this one is sure to be in fine shape.

Have a look and judge for yourself: 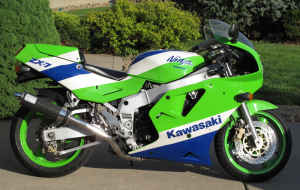 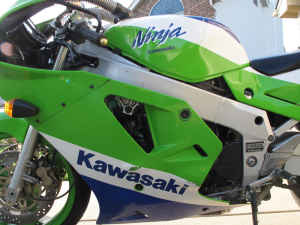 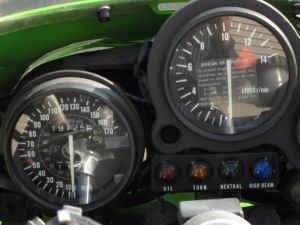 Own a piece of Super Bike History. 1989 was the first year of ZX-7 production, worldwide. Factory Race Team looks and fantastic performance made this a highly desired bike in it’s time. This is the same model bike as used by Doug Chandler to win the AMA Superbike Title in 1990.

This bike is a former California model and as such had all of the emissions plumbing. This has all been removed, though may be included if you’d like, with the bike being re-tuned to suit. Performance is substantially better due to this modification.

Bike is all stock with the exception of the removal of the emissions components, the D&D exhaust and a Vance & Hines ignition advancer. Original bodywork, windscreen, seats, all of it. I do not have the stock exhaust, though I do have another aftermarket exhaust. A Yoshimura Zyclone full system with a Polished muffler. All components of the bike work as they should (blinkers, horn, brakes, starter, clutch, transmission, etc…). There are no ‘odd’ noises coming from any part of the bike or the motor. The original tool kit, with all originally included tools, is under the passenger seat. The only things missing from the bike are the original reflectors and the license plate light.

Bike does have light damage to the left side fairing, as seen in the photos. No cracks, just a few scrapes. Easily repairable.

Also included in this sale will be a replacement sticker for the left side fairing, a factory service manual and a book I made of prints of the micro-fiche showing all parts and assemblies.

And there you have it.. Put on a new set of skins and you’re ready to rock-n-roll and be the talk of your local bike night. If you’re a fan of the early ZX-7’s like Neal and I jump over to CL and check it out. If you have any questions about this one Neal is quick to respond and a pleasure talk to about Kawasaki’s.

I just remembered how long I’ve been a Kawi fan… Does anyone, besides me, remember being in grade school making noises like you’re shifting gears, but instead you used the motorcycle manufacturers name? It goes like this:

Kaawww (1st gear) waaaaaaa (2nd gear) saaaaaak (3rd gear) kiiii (4th gear) and so on.. 3rd grade- I was doing that! Ahh… the memories I have of motorcycling.