Looking for a 25 year old sportbike that looks cleaner than most that are 20 years newer? Here you go: .

A lot of early VFR history can be found at www.motorcycleclassics.com – here is a snip:

“Every year the hue and cry of frustrated American sporting riders rises anew, with fresh moaning and weeping and gnashing of teeth,” wrote Cycle Guide in July of 1985. “And always the piteous wail remains the same: ‘give us the good stuff.’”

What Cycle Guide was referring to was Honda’s 1984 decision to sell its full-on, race-based, liter-class sportbike, the VF1000R, in Europe only, while bringing the more touring-oriented VF1000F to the North American market. They might have added, “… but be careful what you ask for,” because in 1985 the VF1000R finally appeared in U.S. Honda sales brochures — though perhaps not because of the clamoring of American consumers. 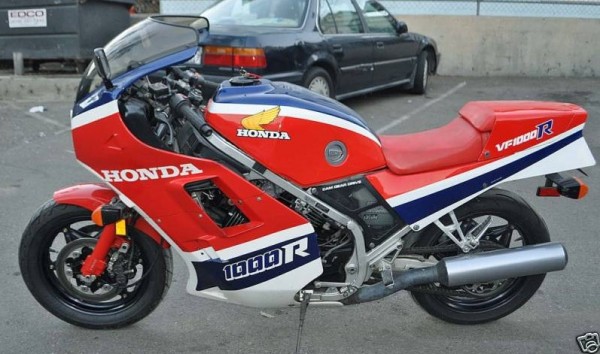 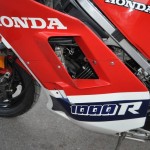 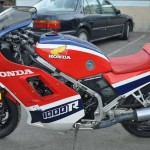 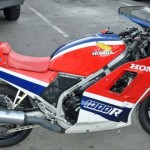 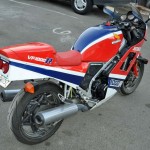 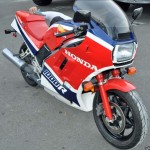 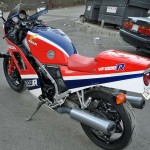 Additional information from the seller:

Excellant Cond.
Exc condition, never been down.
All original paint, minor chips, dings and scratches from storage over the years.
Numerous pictures to show the good and the bad of it.
New battery, 3 or 4  weeks ago.
Video  on  You Tube.
2007  tags, Bike is on Cali PNO, so no penalties.
Being sold to reduce size of large collection.
Getting more into antique bikes.
58year old owner, former bike wrench and shop owner.
Every effort has been made to show condition of bike with pictures and video.

Video from the seller:

The detailed pictures indicate a few small paint chips and blemishes but the bike appears to be in very good condition considering it is a quarter-century old. With a buy it now price of $4,500 – this might make a good bike for a collector who is also looking for something they can ride.