This classic Ducati Super Sport has, according to the seller, spent most of its existence in a museum. In some ways that is a shame; these 900cc bevel-drive Ducati twins are long-legged beasts that deserve rambling stretches of road. On the other hand, thanks to collecting souls who save such bikes, this fine example continues to exists in amazingly pristine condition.

From the seller:
This Ducati has lived in climate controlled museums for the last 20 plus years, first in Willie’s Motorcycle World Museum which was located for years in Daytona Beach, Florida. When Willie closed the museum in 2002, I purchased this bike and several others from the collection. This bike was restored in the black and gold color scheme in Germany prior to being shipped to the Daytona Beach museum, where it was displayed for the entire time the museum was open. I don’t think the bike was ever started while it was there.

I brought the bike to my museum and rebuilt the carbs, replaced the fuel lines, cleaned the fuel tank, replaced the plugs, and battery and completely cleaned the entire bike. I have ridden the bike only occasionally since I’ve had it. It still rides and runs just like it looks. This is one of the last Bevel Drive Super Sports. The bike’s speedometer is in kilometers instead of miles, since the bike was originally sold in Germany. The original kilos are shown. The frame vin # on the frame is 91360. The engine # is 93627. For all the Ducati gurus out there; if you check pages 81 through 85 of Ian Falloon’s book “Original Ducati Sport and Super Sport” you will find these numbers are correct for the ’82 Super Sport. This is the definitive book on authenticating these bikes.

This is a beautiful museum quality investment Ducati that has been pampered for years. You can ride it, show it, or just sit and look at it. The pictures are representative of how the bike looks in person. This is NOT a “photo restoration”. I have decided to reduce the collection of bikes, and am selling those bikes that I rarely ride, or that I have duplicates of the same bike. I will include a couple of shots of the museum so you can see where the bike has lived for the last 10 years.

Take a look at some of the many photos as provided by the seller. The early 1980s Super Sports were not nearly as loved as the earlier “green frame” 750s, but with graceful lines and striking black and gold paint, this bike is still a looker. 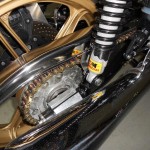 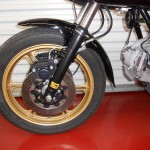 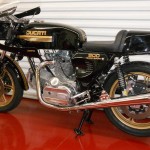 The going rate for these classic machines is certainly going up. Bidding has been spirited on this one, and with No Reserve on the auction this beauty is going to a new home soon. and see if this is what you need for your collection!